Picture this: Halloween is right around the corner and you still have no idea what you’re wearing to that costume party. You look to Google for answers, but most of the girls wearing costumes are portraying white characters. You finally find one decent costume but it’s a girl dressed as Beyonce… which you’ve done at least three times before. Sound familiar? If you’re a Black girl looking for Halloween costumes that you haven’t done before, check out this extensive list! We know you’ll find something to re-ignite that Halloween spirit!

If you’re a Black girl and you’re blonde, we know the struggle! Trying to find a character that looks like us is extremely hard. People always suggest Halloween costumes like Beyonce or Nicki Minaj but we’re tired of those! This year, be Patti Mayonnaise from Doug. It’s cute, simple, and hits the nail on the head.

We know we’re not the only ones who had a girl crush on this Disney princess. Kidagakash from Atlantis is another great option if you’re a black girl who happens to have a gray or light, ash colored wig. Halloween costumes like this are a great alternative if you’re tired of being Storm from X-men.

Truly an iconic character. We found the perfect recreation of Dionne from Clueless’ outfit! This Halloween costume is sure to turn heads because it is so spot on. Pair it with a big church hat or a bucket hat (like the model) to complete the look.

We may be dating ourselves, but we loved Susie from Rugrats. She was sharp and quick as a whip. She made sure those babies were safe from Anglica’s evil wrath but wasn’t too worried to not play along with them. Halloween costumes like Susie’s are easy to recreate because of how popular she was as a character. The costume doesn’t have to be spot on for everyone to know who you’re dressed as.

Storm was that bitch before anyone else! She was a character that paved the way for other Black girl cartoon characters in movies and television. Storm has a variety of Halloween costumes because her outfits changed every so often. The costume below is one of the most popular fan favorites.

If you haven’t seen Euphoria on HBO you are truly missing out on something beautiful and real. The show follows Rue (played by Zendaya). Rue’s costumes are usually very relaxed and casual. We thought this would be a great idea for people who like easy or last minute Halloween costumes.

Our favorite character from Black Panther! It’s been said that she’s smarter than Tony Stark (we didn’t need it to be confirmed, we been knew). Her light and joyful energy broke the tension in the otherwise tense movie. She’s cute, funny, and smart. Why wouldn’t we want to be her?

Roxanne from The Goofy Movie

Now, it was never explicitly said that the characters in The Goofy Movie were supposed to be Black but, we all knew they were. Roxanne (the love interest) has a great and simple outfit. Halloween costumes that are this simple may get some confused looks so we suggest going the extra mile with the makeup and hair. Get a ginger wig and color your nose with a brown liner to get the full effect.

Penny from The Proud Family

Does anyone remember the episode about LaCienega’s huge feet? Just us? Okay. Anyway, Penny from The Proud Family is a great character. She always tried to do the right thing. The Proud Family had a large audience so you don’t have to goth extra mile with this costume. Pair a pink sweater with a darker pink skirt and you’re good to go!

This costume is hard to find as is because of it’s print but trust us, it’s going to pay off! We found the closest dress possible and with a little bit of elbow grease, you’ll be able to recreate Libby’s dress.

Number 5 from Kids Next Door

Number 5 in the Kids Next Door but number 1 in our hearts. Number 5 is a great idea for Black girls that are looking to switch up their halloween costumes. Number 5s outfit is simple but also cute! We could see ourselves wearing these pieces separately, any day.

Gamora from Guardians of the Galaxy

The best guardian of the galaxy! And with such an amazing backstory too. We love Gamora (played by Zoe Saldana) and the fact that she doesn’t take crap from anyone! We know her skin isn’t brown in the movies but we still think Halloween costumes like this are great to break up the routine of pop stars.

Missandei from Game of Thrones

R.I.P. Missandei. Gone but never forgotten. We love this character. Missandei is smart and kind. She started from the bottom and it made it to advising the dragon queen. Because Game of Thrones was such a detailed show, everyday clothes aren’t going to look exactly like her outfit but we think we came pretty close to recreating it.

Tiana from Princess and the Frog

Halloween costumes of princesses are always a good idea. Thankfully, we have a Black Disney princess. It only took them about a million years but hey, we’re finally here. Tiana is the definition of princess even before she met her prince. Wear this costume if you really want to wow the crowd.

Taystee from Orange is the New Black

The OG herself! Taystee is known for keeping it real on Orange is the New Black but she’s also super relatable. We feel like she’d be an amazing friend. While looking for a replica of her outfit, we noticed her prison uniform looked a lot like scrubs. If you buy tan scrubs for this costume, no one will be the wiser!

Ariel from The Little Mermaid

The Little Mermaid’s Halloween costumes have been around for years. What makes it different this year is that Disney has confirmed that in the live action remake of the movie, Ariel will be played by a Black actress. Excuse us as we rush out to get a mermaid costume and red, crochet dreads!

Bliss from The Power Puff Girls

The Power Puff Girls bring back many memories from out childhood. Recenty, the trio added a new sister to their crime fighting gang! Bliss, another product of the professor, is their older sister who is just as, if not more, fabulous.

Did you know that the original Betty Boop was a Black woman? We thought we’d put her in here because she’s typically portrayed as a fair skinned woman. We want to see more Black women in Betty Boop Halloween costumes!

Can we just say that we have absolutely no idea what is going on here? But we love it. We don’t know how or why but somehow the rainbow sweater works with the yellow cowboy boots. Don’t ask us to explain. Just have fun with this costume because that’s what Goo would want!

This whole outfit is a vibe. Sasha did that when we were too young to know what ‘that’ meant! She was and will always be a style icon. (With or without feet!) Since Sasha is wearing everyday clothes, try to emphasise your Halloween costumes with hair and makeup. Go the extra mile and get coloured contacts or your old razor flip phone too!

We hope you liked this list and found some inspiration. Which character would you like to go as for Halloween? Let us know in the comments below! 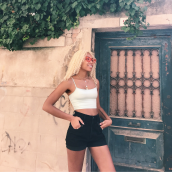 The 8 Most Relaxing Spas Around The World