Welcome To The First Order

In 2012, at the Grand Opening of New Fantasyland, Disney first recognized “Disneybounding” with a picture of Molly Lynn Robinson and L.M. Smith dressed as Belle and Cinderella, respectively. (“Disneybounding” was made famous by Leslie Kay, though the concept of dressing in casual, everyday fashion inspired by Disney and Harry Potter characters has been around for a long time.) With the absorption of Lucas Film by The Walt Disney Company and the expansion of the parks to include Galaxy’s Edge, embracing the fashion of Star Wars characters has rapidly become a popular option for park-goers and fans alike.

Supreme Leader Kylo Ren, also known as Ben Solo, is a Jedi who turned to the Dark Side. Though technically not a Sith, Kylo is a Master of the Knights Of Ren and fights for The First Order to rule the galaxy. His iconic fashion of black on black on black is only broken up by a small amount of red, (seen from his red of his lightsaber, scar, TIE Fighter, and recreated helmet). One of the best things about Disneybounding, though, is that you can interpret the character in any way you like! So, here are 10 fashion tips to dress like Kylo Ren!

The Power Of Dark Side

As seen in the photo above, I stood in front of Kylo’s ship in Galaxy’s Edge wearing:

I absolutely adore this particular leather jacket because of the pleated sleeves, the First Order zipper, and the back design that mimics Kylo Ren’s one-of-a-kind lightsaber. Though that exact jacket was a limited run, it can be found on eBay and other second-hand fashion locations. There are other Her Universe pieces inspired by Kylo Ren, (and other Dark Side users such as Darth Vader and Darth Maul), that are still available on her website, Hot Topic, and ShopDisney.

The constellation pants from Hot Topic are one of my favorite fashion buys ever from that company.  It is part of the Blackheart brand and I have seen it available in the Autumn for the past couple of years. Luckily, constellation and other celestial prints are becoming very popular again in fashion and can be found in multiple stores in plenty of sizes. It is a nice way to make a nod to the outer space part of Star Wars.

In contrast to Darth Vader, Kylo Ren received treatment of costume changes, with a different look for each movie. In The Force Awakens, Kylo wears a robe with a woven hooded capelet; in The Last Jedi, he wears a tunic and pants with a plain cape; in The Rise Of Skywalker, he wears the rebuilt helmet and woven belt. So! This first look is based on The Force Awakens costume, with a:

“Geek Bound Apparel: Elhoffer Design is a clothing company focused on making its customers feel amazing and powerful. All apparel is designed and manufactured in Los Angeles, California to ensure each garment is crafted with the utmost care and caliber. We value a great fit and quality textiles, and we manufacture apparel in small and often limited runs. Designs are inspired by pop culture and use silhouette, color, texture, and lines to tell the story of the character or fandom while creating flattering and chic fashions.”

The torso of the sweater is inspired by Kylo’s woven tunic, then has the same pleated sleeves, and a thick cowl that can work as a scarf or hood. Though it is currently out of stock if you reach out to Elhoffer Design they are always interested to hear what they should make again. But also, there are Facebook sell/swap groups and other second-hand fashion locations you may be able to find it for sale.

For alternatives, though, there are a lot of black sweaters with unique designs that are similar enough. Remember, dressing like your favorite character is not about cosplaying, but just an everyday interpretation to show your love.

The reason I picked the red flannel as part of The Last Jedi fashion is because of the scar he has for most of the movie and the fight scene with him and Rey against Snoke. (It also is a reference to his rebuilt helmet when I wore it for The Rise Of Skywalker.) Red is the well-known color for the Dark Side, The Empire, and The First Order, given that Sith and other Dark Side users have red Kyber Crystals in their lightsabers. So another great way to dress like Kylo Ren is to have a:

It was easier to find a flannel in the men’s fashion department, so don’t be afraid to look around!  As part of their inhouse brand, Hot Topic long-sleeve button-downs are usually available through Autumn and Winter.

Star Wars: The Rise Of Skywalker

Now, it may take a moment to recognize why this is a Kylo Ren look because it is actually based on the Ben Solo outfit Adam Driver wears at the end of The Rise Of Skywalker! Pictured above is the “Essential Oversized Sweater” by Elhoffer Design. Though this sweater was an investment, it has become one of my favorite items of my wardrobe and it is a basic piece I wear all the time. And how crazy is it that it looks almost identical to Ben Solo’s sweater?

Back to Star Wars: The Force Awakens…

When I went to Hollywood Studio’s Galaxy’s Edge for the first time I was torn between getting the traditional Sith tunic, the fashion black robes, or Kylo Ren’s cowl. Seeing as I planned to and have worn the cowl in everyday life, it was and is the best choice! Whether it is windy, raining, or snowing, the hood is huge and thick, and the scarf part is nice and wide, (though I have it under the jacket, it goes across my shoulders, down my chest, and even farther down my back). Almost cosplay worthy, there are a lot of people who make similar items on Etsy and other custom places.

Though I don’t know what Kylo Ren may have needed to carry around, you can’t go wrong with a:

Disney, Her Universe, Hot Topic, Hero & Villains, and Etsy have a plethora of purses from a wide range of Star Wars stories, (from each of the trilogies, from spin-offs, and even new additions like The Mandalorian). Often made by Loungefly, there are many different designs, sizes, and products, from wallets to adult backpacks. Coach has even made Star Wars merchandise in the past, so it is totally up to you how spot-on or subtle you would like your purse to be.

As for other accessories that can add to the Kylo Ren-ness of your outfit, look out for things with black and red coloring, such as:

8. Black and red headphones from Amazon.

Be one with The Force! Bluetooth or wired, they connected with my phone easily.  This particular pair has buttons on the side of the right speaker to adjust the volume, pause or play, move forward or backward on a playlist, and even answer calls. When I did my Kylo Ren fashion for my mid-term exam week last Spring, these headphones were a perfect addition to use while I was walking around the campus.

It’s What’s On The Inside…

Though most people may not know or notice its importance, Kylo Ren’s lightsaber is special in many ways. Not only does it have a one-of-a-kind hilt with a design we have not seen before, but it actually has a fractured Kyber Crystal that causes the unstable quality of the blade. (This is easily a reflection of the inner fracturing Ben Solo/Kylo Ren feels with the pull to both the Light and Dark side.) Though the same effect can’t be created in real life, you can still have a red lightsaber! Here is my:

Whether it is a cheap toy from Walmart, a movie replica, a hand-picked and hand-built ‘saber from Galaxy’s Edge, or a custom piece from Saberforge that you invested in, there are many different places to get lightsabers. Though there are many different designs and Kyber Crystal colors, for Kylo Ren you would want to stick with the classic black, silver, and red color pallet.

Moonglow offers custom, hand-finished fashion jewelry featuring The Moon from the date of your choice. Mine, as you can see above, is the half-moon from my birth date. Not only is this a great reference to the original trilogy and Ben Solo’s parents, but it is also another way to incorporate the celestial side of Star Wars.

Now that you have a better understanding of both the character and the fashion inspired by Kylo Ren, you can be off to rule the galaxy! Comment below any other Disneybounding suggestions and keep an eye on Society19 for more entertainment inspired fashion! 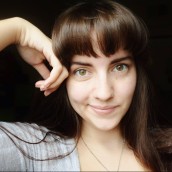 Author | English Major | #RealLifeBelle | Academic Romance | "This was no accident, this was a therapeutic chain of events." | www.TheMousyGirl.com

12 Amazing Phone Accessories All Nerdy Girls Need In Their Lives

Iconic Places In LA You Need To Visit