College is a period of time in many of our lives when we seriously consider who we want to be in life. We’re legally considered adults. A popular trend I couldn’t help but notice throughout college was the vast amount of people who became interested in being politically active or started keeping up-to-date with current events in a way the majority of us may not have necessarily done in high school. As we grow older, we take more notice of the world.

One of the great things about the university experience is how ripe it is for growth, learning, and development. If you’re one of those college students who always wanted to be politically active, but didn’t know how to begin (and I get it: politics and news are seemingly overwhelming), don’t fret because this list is for you. Activism takes many forms is more nuanced than the media will make it out to be.

The first truth we need to comprehend about being politically active is it starts off small and local 99.999% of the time. It’s never as easy and straightforward as marching on straight to Washington. Colleges often try to nurture and advance the political interests of students as they grow into well-adjusted adults. There are probably plenty of clubs at your college about a variety of politicized subjects you may be passionate about, or simply want to know more.

For example, my school had several such as Black Student Union, Asian Student Union, Model UN, LGBTQ+, FIRE, and more that included themes such as feminism and racial equality. These organizations tend to discuss current events and share different perspectives from all walks of life. Some of them even involve forms of activism such as marching and sit-ins. These are a great way to start being politically active and aware because all of the options are just so available to you as a college student, and you’ll definitely learn a lot.

2. Take Political Science Courses (If You Can)

You know how there are those elective classes you’re required to take about any subject, as long as you receive the necessary college credit? It’s actually an amazing opportunity to choose a course about something that, while not necessarily related to your major, you’ve always been curious about and would like to learn more. I did this in college when I recognize my burgeoning interest in politics, and decided to take two political science courses. This is a real chance to see just how much political involvement is for you.

It’s also a great educational opportunity as well since you can learn so much about media, history, political ideologies and theories, and more. In a sense, just by engaging in class and allowing yourself to learn all these new things with an open mind, you’re being politically active on a small scale, but it’s still impressive. All of this can lead to a broader understanding of how politics works in the modern world.

In this day and age, it is very easy and common for us to receive updates on current events through social media, but this has repeatedly been proven to be unreliable and isn’t trusted by many citizens, especially in the wake that Facebook won’t censor false political advertisements. Social media can be a vastly powerful tool to bring awareness and inspire change, but it’s also a cesspool. There are so many false stories blindly shared without fact-checking and people trying to assert their own narrative that it can be difficult to discern what’s factual and what’s not. Some of us may feel like it’s too much, so we shouldn’t bother trying to stay updated.

That’s why it’s a good idea to, at least a few times a week, take time out of our day to check a few reputable news sites and read about what’s going on in the world. Staying politically active almost means staying politically informed. While it’s true some publications can be biased, many are under obligation to report the facts. Check out a few sites to see commonalities and if the story changes to fit a particular agenda. This can help us in the future when we know what stories to weed out. It also advances our intelligence to read between the lines and recognize for ourselves what is worth our time.

10 Celebrity Couples Who Got Together During the COVID-19 Pandemic

Is there a cause you genuinely believe in? Do you want to be more politically active in a way that doesn’t involve simply sitting and learning all the time? Volunteering might just be for you then. What’s so wonderful about volunteering is it caters to anyone with a particular passion. There’s always so much to do, and so many ways to help. Whatever you want your politically active cause to be, there will be some volunteering opportunities to do so. You’ll really feel like you’re making a difference in our small and often-crummy world. Sites like VolunteerMatch and Volunteer New York are specifically catered to finding programs near you looking for volunteers.

5. Call Your Local Legislators and Politicians

Finding out who your House of Representatives and your elected officials are is crucial to being politically active. Why? Because you can get in touch with them. Contacting these politicians may seem like a waste of time, but the more people call to address their concern, the more likely it will be taken more seriously and addressed by the government officials. It’s highly recommended to do so by phone, as these politicians obviously have a bulked-up email and can’t possibly read everything they’re sent. You should always make your voice be heard. You’re still doing more than those who don’t use it at all, and that isn’t nothing.

Voting is, without a doubt, one of our biggest responsibilities as not just politically active citizens, but just as people in this country. I cannot stress the importance of this. By voting for people you would like to see in office, you are helping slowly but effectively shaping this country. Your vote matters. It may just be one, but they all add up. It doesn’t just have to be for the presidential election every four years; local and midterm elections are also imperative. You can make sure you’re registered to vote here.

Don’t fall into the trap of believing you can’t make a difference in our political climate. There is so much to do, and we need people like you! Getting politically involved can be so rewarding. This our country and our world. We have a right to fight for it. 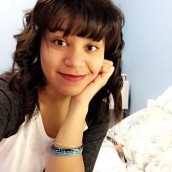 10 Facts That You Probably Didn’t Know About Kamala Harris