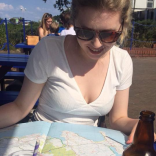 This is probably one of the most annoying things you could say to any tv or film student, and we get it all the time! Yes, if you study television then sometimes we do watch tv shows or films, but more often than not we do actual work too. Plus if you have seen what we had to watch and why we’re watching it, you’ll soon realise it’s no fun.

Ah yes, the dreaded group work. Every course at one point or another will have to do group work modules but it can be so frustrating when every. single. class is marked as a group. It makes sense because when we go into real jobs, of course, we’ll be working as a group but sometimes it would be nice to be marked individually. This brings me so nicely on to my next point…

3. Everyone Wants To Direct

And with group work comes the different roles within the group and of course everyone wants to direct. At the start of each semester in every class you will be put into groups, sometimes if you’re lucky you get to pick groups which makes it slightly easier but more often than not the lecturer will pick them. Then comes the awkward “I don’t mind what role I do, would rather direct but happy to do whatever”. This is a lie. No-one is happy to do whatever. This means I want to direct and nothing else, which brings me on to…

4. No-one Wants To Do Sound

Absolutely no-one in the group wants to do sound. This is mostly due to a lack of understanding how to do sound, and how easy it is to mess up while also being the hardest to fix. This role is often landed on whatever poor soul missed class that day or wasn’t fast enough to say they didn’t want to do sound. Fortunately, I have never been in charge of sound, but I salute everyone who has because I know it’s no easy task.

The most grueling part of the job, in my opinion, is editing. Some people love editing and say it’s where the project really takes shape and I agree but it’s, without doubt, the most time-consuming part. Having to watch through hours of footage and pick all the best bits and then stitching them together so precisely, staring at a screen for hours to the point you’re sick of whatever it is you’re editing and can’t bring yourself to watch it after because you’ve seen it so many times. No thank you, next!

6.The Walk Of Shame

The walk of shame to those who study television or film is a completely different thing to those who don’t. The walk of shame is that dreaded feeling you get while walking along the university to the equipment store, hauling a tripod and camera back late. The icy stares and passive aggressive tone you will receive on arrival is bad enough but is even worse if the student who booked it out after you are waiting on their equipment.

This is a real frustration that can be felt with all television students. Working in the broadcasting industry doesn’t necessarily require a degree, just a passion and willingness to learn, although a degree will help. However, trying to get that initial foot in the door can be hard and is often about who you know, not what you know. Entry level job requirements are crazy, wanting at least 2 years experience in a starting job that may or may not pay you is insane.

Can you relate to these? Are there any other things that you would only understand if you study television? Share them in the comments!

10 Cool Work Outfits For This Summer

4 Cheap IKEA Items That Your Room Will Thank You For