We’ve all been subjected to one of those nails-on-a-chalk-board moments when we have been asked out by somebody and we are just not into them. I have been in a few of these situations, being partially deaf sometimes leaves me in sticky situations. When I was in school, I was asked to go to an end-of-year dance by a boy and because I couldn’t hear him, I agreed. I knew nothing of this ‘date’ and so I didn’t turn up. I was the most hated person in school but I genuinely didn’t know what I had agreed to.

This is my story…

I often find myself in situations which I don’t know how to get out of. I’m too kind, I don’t like ignoring people or being considered rude. I like to make people feel comfortable, I like to be friendly and approachable. I am one of those people who hate saying no! Being a yes woman is totally a curse!

Believe it or not, this school moment was not the most awkward situation ever. Here goes the ultimate awks story – prepare yourselves!

How It All Began…

A few years ago while I was at college, I began working at my local food shop.

It definitely wasn’t my dream job but it was money and it helped build my confidence. Working at a local store, I met all kinds of different people – the lovely elderly ladies, the family man who talked your ears off and then the exhausted mechanic who would come in every night for his beer and pizza. Yes, you can probably see where this story is going!

So this mechanic, let’s call him ‘Paul”, would come in every night and specifically come to my checkout – even if there was a queue. I remember thinking at the time that this was weird but I couldn’t just tell him to go away. We would talk generally and he would ask about my day and what my hopes were for the future – I came to know everything about him, he owned his own garage, he had a daughter from a failed relationship and he was currently living on his elderly mother’s couch. I always tried to be warm and welcoming to every customer, I liked to show an interest in other people’s lives while trying to make it obvious that I was not into them. But, I’m guessing, my kindness and willingness to talk could have been misunderstood – maybe as flirting, which it wasn’t.

I come into work one day, Valentine’s day was approaching. It was a Saturday, so the store was busy as it usually was on a weekend. My manager noticed me walking towards her, she turned and looked at me. A big smile on her face. I remember thinking that she wanted something, like me to do an overtime shift, but she just stood there, smiling at me. I was so confused. She took a bouquet of flowers from her desk and handed them to me. “These are yours,” she said.

I left work that night with the red roses in my hand, they were beautiful and my favourite flower. The smell was intoxicating and I loved it. I climbed into the car and my boyfriend looked over at me, frowning. I thanked him for the beautiful gift he had left at work for me, but he went on to tell me that they weren’t from him. He was annoyed too, of course. Any guy would get annoyed at some random buying your girlfriend a bunch of romantic roses. But he told me I needed to do the right thing and tell the person that I’m not into them. Once I found out who it was, of course. At this point, I had no idea!

The next day I went into work and saw my manager again. I told her that they were not from my boyfriend and she didn’t seem to know who they were from either. They had been left on the desk with a card, addressed to me. I opened up my checkout and there he was, my first customer – ‘Paul’. The usual beer and pizza in his hand, a huge smile spread across his face. He asked me if I liked the flowers and for the first time in my entire life – I was speechless. How can I tell somebody I am not into them without hurting their feelings? I kept thinking.

‘Paul’ was definitely not my type, he was older and I had a boyfriend who I loved more than anything. I thanked him for the flowers and told him it was not necessary. He told me how he loved my smile and from that my smile died, I didn’t know what to do, but I knew what not to do – smile. I suddenly became conscious of my facial expressions and I tried to remain serious but warm at the same time. I didn’t want to hurt his feelings. He then asked me what I was doing that night and I replied with ‘nothing’, trying to avoid the inevitable. How do you tell somebody in a nice way that you are not into them? I kept thinking, knowing what was coming next. Yes, he then asked me out for a drink after work.

This is where it got even more awkward than it already was. I blurted out ‘NO!’, it sounded so harsh and his smile faded into annoyance. I couldn’t control my words at that moment, it was like my mouth took over from my brain. I felt so awful. He told me to have a good evening and then left.

Now, whenever I see him that awkward moment floods over me. I felt bad for replying so abruptly and hurting his feelings – but then I noticed – he did the same thing with the new girl and I didn’t feel bad anymore. But, the story became the talk of my workplace. Nobody will let me forget that awkward moment!

The morel of the story is – if you need to tell somebody you are not into them, just tell them, be honest and don’t put it off. Honesty is the best policy. 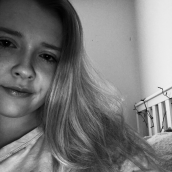 A university graduate, aspiring scriptwriter and part-time script reader, I am always happiest when writing. Whether that be a fictional story or a non-fictional lifestyle article.

9 Adorable Red Outfits You Can Wear This Fall

Dining Hall Dos And Don’ts To Save You From Embarrassment