Your friend Jerry is hosting his annual holiday party, and he has asked all the guests to come wearing an ugly Christmas sweater. You think this idea sounds fun, so you text Jerry that you’ll be wearing the best (by which you mean ‘worst’) sweater at the party. Jerry, as he usually does, texts you back immediately and responds that, if you’re that confident, he’ll just go ahead and make a competition out of it. Now, because your friend is a wealthy guy, he tells you that the prize for the ugliest Christmas sweater will be his ‘old’ sports car, which he hasn’t used since he bought his new one.

The night of the party, you arrive wearing your amazing Christmas sweater, and everyone you speak to can’t get enough of it. Walking around Jerry’s house, you visit with people that you haven’t seen in a long time. You find Tim, who was the best man at Jerry’s sister’s wedding, in the dining room looking at the beautiful winter landscape from out the window. You notice that Tim’s Christmas sweater has a picture of a large sloth on it, but not much else. While it’s a nice sweater, there’s no way it’s going to beat yours.

Leaving Tim to continue looking out the dining room windows at a small deer which just emerged from the snow covered trees in the distance, you again enter the entrance hall. As you walk in, you spot Catherine, your long time friend, who has just arrived at the party. You immediately notice her Christmas sweater, which has a gigantic 3D wreath covering the entire front. The wreath catches the light of the two old fashioned lamps on either side of the door, making it sparkle quite nicely. 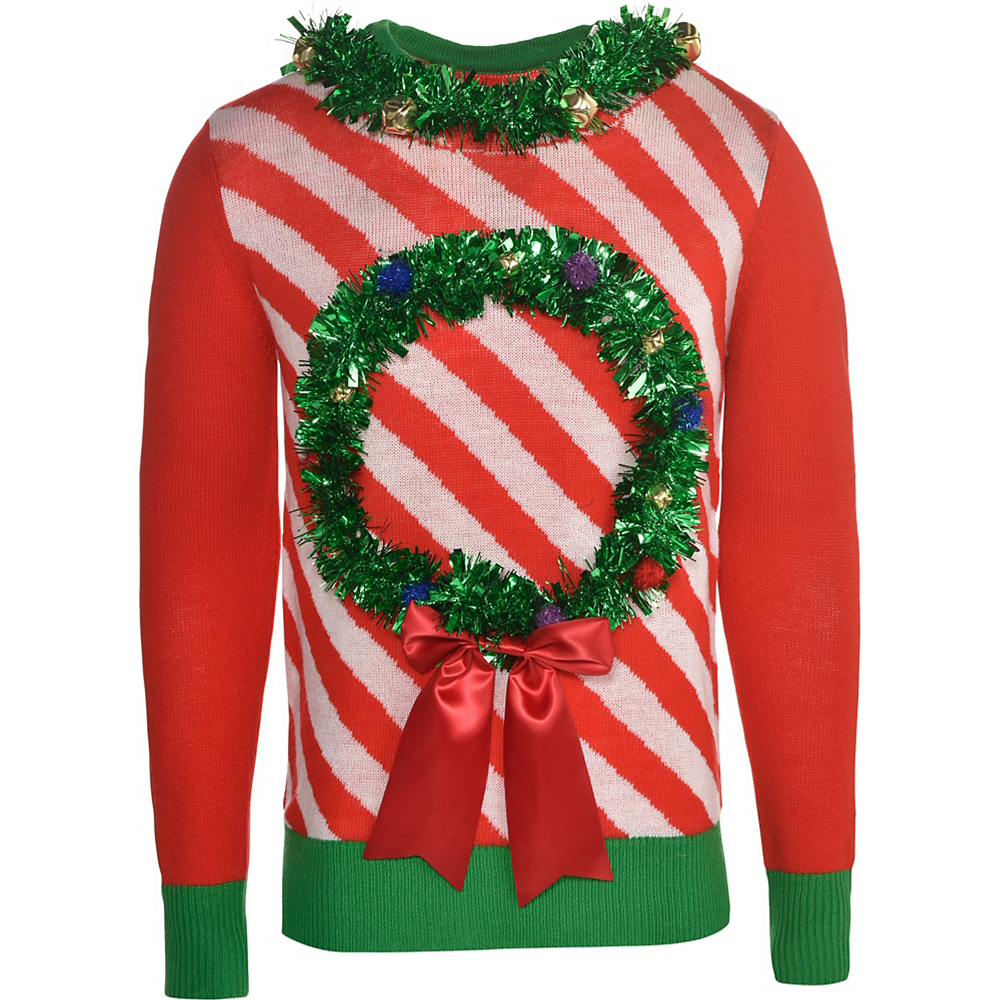 After a pleasant conversation with Catherine, you suggest heading toward the sitting room, where you’ll both be more comfortable. As soon as you both sit down on the dark brown leather sofa, Jason (an editor for the local paper) enters the room with two glasses of champagne. He hands one to Catherine (he had already given you one earlier), and sits down on a nearby chair to join the conversation which, of course, centers around Christmas sweaters. You remark how his, a picture of Dwight from The Office, makes you laugh.

Bidding Catherine and Jason a momentary farewell, you leave the sitting room to go and visit with more of your friends. Passing the marble staircase leading to the second floor (which you’ll visit later), you casually walk around for a bit with no clear destination in mind. Jerry, who’s job as host is to make sure that everyone is preoccupied with chatting with at least one other person, approaches you wearing his own Christmas sweater, which is covered in tinsel with little bells hanging from it.

Putting his arm around your shoulders, Jerry leads you to the kitchen, where Kevin – your old roommate from college – is helping himself to the piles of delicious cookies on the counter next to the oven. Kevin’s mouth is currently full, so he can’t talk to you at the moment. By pointing eagerly to his Christmas sweater, however, you can completely understand what he wants to tell you. His sweater has a picture of Baby Yoda from the new Star Wars TV show on it. From the many texts that Kevin has sent you about the show, it’s not surprising that he chose that sweater to wear.

After finally swallowing his mouthful of cookies, Kevin is about to speak when Rebecca bursts into the room. She proceeds to hug all three of you, and then asks everyone what they think of her Christmas sweater. Taking up a large portion of the sweater is a mirror which is framed by a picture of a wreath, complete with a red bow. You tell Rebecca that you’ve never seen a sweater quite like hers. She thanks you for your kind words, but states that she has no chance of winning against yours…

As Jerry and Rebecca are talking about their individual summer vacations, Kevin leans over and asks if you could show him the second floor of the house since he’s never been here before. You happily accept his request and begin to walk to the door leading to the foyer. As you’re about to push the door open, Kevin turns back for a quick second and swipes a plate of cookies off the counter. So, you both exit the kitchen and enter the foyer in order to ascend the magnificent staircase. However, your path up the stairs is blocked by Zach, who is lying outstretched halfway up. Upon spotting you, he quickly springs to his feet and greets you both. Kevin asks why he was laying on the stairs, but you miss his response because you’re trying to read what his Rick and Morty Christmas sweater says.

You finally are able to read what Zach’s sweater says just as he’s finishing his explanation. Turning to Kevin, you see the confused look on his face and decide you don’t really need to know. You and Kevin pass Zach and reach the second floor. After asking Kevin which way he wants to go (forward, left, or right), he hands you the plate of cookies and opens the carved wooden doors in front of him. You both enter a long and quiet hallway with many doors leading off to either side. Near the end of the hallway is Angela – your next door neighbor – who has seemingly just left one of the rooms. As she approaches you, Kevin remarks that he likes her cat Christmas sweater between bites of the cookie he’s eating.

Angela quickly thanks Kevin for saying so and, turning to you, asks if you’ve seen Alexander anywhere. You reply that you haven’t seen him, but that you’ll text her as soon as you do. After a quick thanks, Angela opens the door that you just passed through with Kevin, and leaves you both alone in the hallway. Deciding to continue onward, you both walk to the end of the hall and peer out the fogged window looking onto the brightly lit driveway. Almost immediately, you glimpse a shadow at the corner of the house walking quickly toward the parked cars. It’s Alexander! He slips and falls suddenly and, for a brief instant, you can see that he’s wearing a Christmas sweater with the Grinch on it. Rising back up, Alexander walks to his car, gets in, and drives away.

You and Kevin are still looking out the window at where Alexander’s car disappeared when you both get a text from Jerry to head downstairs for the Christmas sweater competition. When you both arrive downstairs in the living room, everyone – minus Alexander – is gathered around. After voting on who has the best Christmas sweater, you are declared the winner. Jerry states that your sweater, which has a reindeer head coming out of a fireplace, is so funny and well done that you were guaranteed victory the moment you decided to buy it. Handing you the keys of his old sports car, Jerry offers you congratulations as everyone else claps and cheers.

Have you ever worn an ugly Christmas sweater? What did it look like? Let me know in the comments below!

10 Things To Prepare You For Your First Time Camping

The Best Ways To Spend A Socially Distanced Valentine’s Day

Gifts That Will Actually Impress This Valentine’s Day

Holidays To Celebrate From Around The World

10 Cashmere Sweaters Under $75 From Your Dreams

15 Sweaters Everyone Should Own For The Spring