Have you ever thought about what it would be like to go to a big University? If so, there is absolutely no school like Penn State. I’ve a compiled a list of things that every PSU student knows is definitely not true, which will give you an idea of what not to expect. These are 10 things you will never hear a student say at PSU.

Every day there is something going on. Whether it’s a party in East, a movie night in the HUB, or even just a game of frisbee in the grass, you’ll never find yourself bored here at PSU.

2. “No one really goes to football games.”

If you’ve ever seen the inside of Beaver Stadium, you know it can hold over 100,000 people. And on Sundays, sometimes it does. Get your season tickets fast because they can sell out in under five minutes.

3. “There is never anyone around.”

I mean, it is a really small college. (*jokes)

Penn State University is ranked #4 out of the world’s largest and strongest alumni networks. So you could be anywhere in the world and find a Nittany Lion. Penn Staters in Hawaii just prove that we are, in fact, EVERYWHERE.

If you’ve never opened your window and yelled ‘WE ARE’, do you really go to Penn State? We say it so much, they made a sculpture of it.

The Berkey Creamery has every flavor you could imagine, including the fan favorite, ‘Alumni Swirl’. But if you want to know what’s in it, you’ll have to make a visit and try it. At Berkey Creamery, the only size is as much as they can fit in your cone.

How To Not Overpack For College

Let’s be honest, even if you don’t go to Penn State, let’s hope you wouldn’t say this…or you’re stupid. Nonetheless, Penn State is home to THON, the largest philanthropic organization run by students IN THE WORLD. Yes, I said world, and I meant it. THON participants raise thousands and thousands of dollars every year for the Childhood Cancer Foundation.

Please refer back to number seven. Need I say more?

These are 10 things I guarantee you will NEVER hear a PSU student say. Can you think of anything else? Share in the comments! 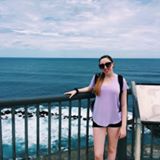 Mackenzie is attending Penn State University in the fall to study Early Childhood Education. When she is not showing off her PSU pride, she is usually hanging out with friends or watching netflix.

15 Romantic Gestures Any College Guy Can Make That Cost $0