Everyone claims their university is the best, and UConn students are no different. What makes UConn unique and special are the things only students understand and love about the university. Keep reading for 20 of those countless things you only understand if you go to University of Connecticut.

1. Taco salads at the Union

Everyone always seems to be eating them, and the line to Tostadas is endless. Chipotle? Moe’s? Neither compares to our taco salads.

I’m sorry, SUBOG. We know you try, but the only things worth going for are maybe free food if you’re into that, and stuff-a-whatever events. Or watching horrible karaoke performances from the same 5 people that show up every week.

Everyone’s family who comes to visit has gone with them to get Diary Bar ice cream. It’s so delicious that once a year during Winter Weekend, UConn students are willing to wait 2 hours in the cold to fill their gallon bucket with free Dairy Bar ice cream.

5. The line to Dunkin at the U

Continuing with the theme of lines, every weekday in the mornings and afternoons there’s a huge line to Dunkin in the Union. We have the Union Street Cafes, but nothing compares to Dunkin, right?

6. It rains every Tuesday

It’s not a myth, it literally does snow every Tuesday in Storrs. Not a drizzle, but windy torrents of rain that destroy all hope of staying dry, umbrellas included.

When you live in an icebox called Storrs that rains all the time, trekking to classes wet and cold is the reality because the bus system never works, especially since it got changed (why is the green line route so long anyway???). Unfortunately, the buses we’re supposed to rely on go off route, aren’t on time and are always crowded when we need it most. It doesn’t help that the bus tracker is inaccurate.

8. Canceling class at the wrong times

Somehow Susan manages to cancel classes on days where there’s barely any snow, and doesn’t cancel classes when commuters can’t get to class. Not that I’m going to complain about a snow day…

No one really knows what went on to make depot campus supposedly haunted. Still, it’s a nice adventure for amateur ghost hunters and filmmakers who are willing to take the bus all the way out there. Plus, what Instagram savvy girl hasn’t gone there for a photoshoot?

Of all the buildings on campus, it’s always TLS that has an issue. Explosions, fried squirrels (RIP you’re everyone’s hero), fallen electric lines… You name it, TLS has probably gone through it. Maybe it’s time to get rid of the building since we’re already building so many new science buildings?

There’s no other professor quite like Abbott. Most STEM majors have had to take his class and experience it in its full glory. Love him or hate him, his rants and teaching style are certainly unique.

There’s nothing quite like a day spent on Horsebarn Hill. The sunsets and sunrises are beautiful, it’s the perfect place for sledding (except for this poor girl), and also a prime spot to be caught smoking weed.

Of all the things to know about UConn, some people only know about our women’s basketball team, and rightfully so because we all know they’re the best, and we have evidence to back it up. They’re literal celebrities on campus and you automatically have bragging rights if you’re friends with one of the players.

Every UConn student has gone to a tailgate. The games aren’t even worth going to because it’s a surprise when we win. People get bus tickets just for the tailgate and leave as soon as the game starts, not even bothering to go in.

15. The poor freshmen living in Towers

Almost all freshmen were assigned to live in Towers, the worst residence halls on campus and needlessly far from the center of campus. It’s an odd place to put the freshmen considering it’s right next to Husky village, resulting in the odd mix of gawking, innocent freshmen and Greek life members.

16. High living in The Oaks apartments

Before the Oaks, there was just Hilltop, Celeron, Mansfield apartments, etc etc. With the newly developed Storrs Downtown/Storrs Center, juniors and seniors have been opting to live in the new, ridiculously priced Oaks. Either way, it’s still better than living on campus. 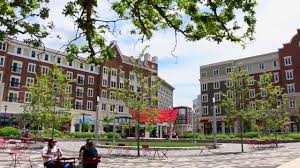 TBH, they say they’re list but often they aren’t. Frats probably do it to make them seem more exclusive or cool, but you can probably get in regardless. Who’s gonna turn down a girl? A simple “I’m with her” *points at girl already walking in* is enough to get in.

Being the only 2 bars on campus, there aren’t many options for drinking if you’re not into frat parties and sad dorm drinking. Students have their personal preferences in bars, and the fierce rivalry of which is the best continues.

Buy and sell is more about funny posts, lost items, promoting fundraisers, and looking for housing more than it is for buying or selling tickets. Bored in class? Go on buy and sell; it’s sure to be entertaining.

20. The amazing experience of Huskython

Yes, we’re not the only school with a FTK dance marathon, but we do it best! Nothing compares to seeing the smiles on the children’s faces when they see people dancing all night long for them. There’s nothing like the accomplishment of raising $1,021,485.37 for the kids.

The University of Connecticut is something of its own, a school to be proud of. We are diverse and have so much to offer, but I guess if you don’t believe me you’ll just have to give it a try and be a UConn student. Go Huskies!

What are your favorite memories from University of Connecticut? Let us know in the comments below!

10 Ways To Indulge On A Student Budget Plan

10 Ways To Take A Break While Studying For Midterms

10 Things You Need On Your Desk While Studying For Midterms