Oscar Upsets happen each year and leave a lot of people in shock. Given the fact that there can only be five nominees in each category (except for Best Picture, where anywhere between 5-10 films can get nominated), it’s even more shocking when these Oscar Upsets take place during the actual ceremony.

While most of the discussions regarding Oscar Upsets center around the four Acting Categories and Best Picture, these surprise wins can happen in the other 22 categories as well. One factor as to why these Oscar Upsets take place is due to how competitive the category(ies) is/are in any particular year.

The unpredictability of Academy voters also means that just because certain films dominate (and win the honors) the awards circuit in several categories doesn’t mean that they’ll be taking home the golden statuette come Oscar Sunday.

Now, across all 24 categories and from the 91 Academy Award Ceremonies that have taken place so far, here are 15 of The Biggest Oscar Upsets Ever:

As stated earlier, most of the talk surrounding Oscar Upsets is in regards to all four acting categories and Best Picture. The most important award ceremonies that take place before the Oscars are The Critics Choice Awards, Golden Globes, SAG Awards, and the BAFTAs. All of those listed award shows are seen by many as precursors for which actors and actresses will be nominated for and/or win the Oscar.

For films released in 2000, the Best Supporting Actress category was unpredictable as heading into the 73rd Academy Awards Ceremony, there was no clear favorite and a different actress won the accolade at each of the four precursor award ceremonies. Harden’s win (for her role in Pollock) is one of the biggest Oscar Upsets ever not just because of how unpredictable the Best Supporting Actress race was that year, but also due to the fact that she failed to get nominated for any of precursor award ceremonies leading up to Oscar Sunday as well!

At the 71st Academy Awards Ceremony, Benigni was won two Oscars for Life is Beautiful: Best Foreign Language Film and Best Actor. His victory in the latter category was unexpected given that his fellow nominees were Edward Norton for American History X, Nick Nolte for Affliction, Ian McKellen for Gods and Monsters, and Tom Hanks for Saving Private Ryan.

One of the biggest Oscar Upsets regarding Best Picture was when How Green Was My Valley won Best Picture at the 14th Academy Awards Ceremony. The film beat Citizen Kane, which is considered as one of the greatest films ever made.

In 1954, the legendary Grace Kelly received rave reviews for each of the three films she starred in that year: Rear Window, Dial M for Murder, and The Country Girl. She ended up receiving a Best Actress nomination for the latter film, which she won.

Kelly’s victory is one of the most memorable and biggest Oscar Upsets of all time as many felt (and do so to this present day) that the Best Actress Award should have gone to Judy Garland for her role in A Star is Born. Garland’s performance was hailed by critics as her Big Hollywood comeback after personal struggles threatened to ruin her career years earlier. Kelly’s performance in The Country Girl is still good, but nowhere near that of Garland’s in A Star Is Born.

Two of the biggest Oscar Upsets took place at the 49th Academy Awards Ceremony. One of these Oscar Upsets was when Rocky won Best Picture. Don’t get me wrong, Rocky is an amazing film and the only reason why the result is considered a huge upset is that it beat the likes of Network, Taxi Driver, and All The President’s Men, all of which are also amongst the most iconic films of all time.

Straight’s Best Supporting Actress win is not only one of the most notable Oscar Upsets ever, but it is also a record-setting one as well! She was only in five minutes and two seconds of the film Network, which set the record for the shortest performance to ever win an Oscar!

At the 78th Academy Awards, Dolly Parton was the favorite to win the Oscar for Best Original Song for her piece “Travelin’ Thru”, which was in the film Transamerica. However, in one of the most memorable (and most recent) Oscar Upsets of all time, Three 6 Mafia was announced as the winner instead for their single “It’s Hard Out There For A Pimp”, which was in the film Hustle & Flow.

Three 6 Mafia also made history as the first hip hop group to win the award. In addition, “It’s Hard Out There For A Pimp” became the second rap song to win the honor after Eminem’s “Lose Yourself” from the film 8 Mile did so three years earlier.

One of the most recent Oscar Upsets on this list, Alan Arkin’s Best Supporting Actor Oscar win for his role in Little Miss Sunshine was a surprise to everyone as everyone was expecting Eddie Murphy to win for his role in Dream Girls. Many felt that Arkin’s win was only because the Academy wanted to give him a “Career” Oscar.

Actor Kevin Costner made his directorial debut with the 1991 film Dances with Wolves (a film he also starred in), which earned rave reviews. At the 63rd Academy Awards Ceremony, the film ended up winning seven of its 12 Oscar Nominations, including Best Picture. That night, Costner was nominated for three Oscars: Best Picture (as a producer), Best Director, and Best Actor. He ended up winning for the former two.

Costner’s Best Director win is one of the biggest Oscar Upsets ever as many were expecting Marin Scorsese to win for Goodfellas. Compared to Costner, who was making his directorial debut, Scorsese was an already established director in Hollywood who had been long overdue of an Oscar Win. Scorsese would have to wait until the 79th Academy Awards Ceremony to finally win his much overdue Best Director Oscar for The Departed.

Remember when the wrong film was accidentally announced as the winner of Best Picture at the Oscars a couple years ago? Presenters Faye Dunway and Warren Beatty were given the wrong card and announced La La Land had won Best Picture.

However, as a few minutes later as La La Land Producers were in the middle of their acceptance speeches, Oscar crew members and Host Jimmy Kimmel came out on to the stage explained that there was a mistake and that La La Land hadn’t won Best Picture! The film Moonlight was the real winner of The Academy’s top prize instead!

Both La La Land and Moonlight were the heavy favorites to win Best Picture that year and given the way in which the win played out, the latter’s Best Picture Victory can be seen as one of the biggest Oscar Upsets ever. 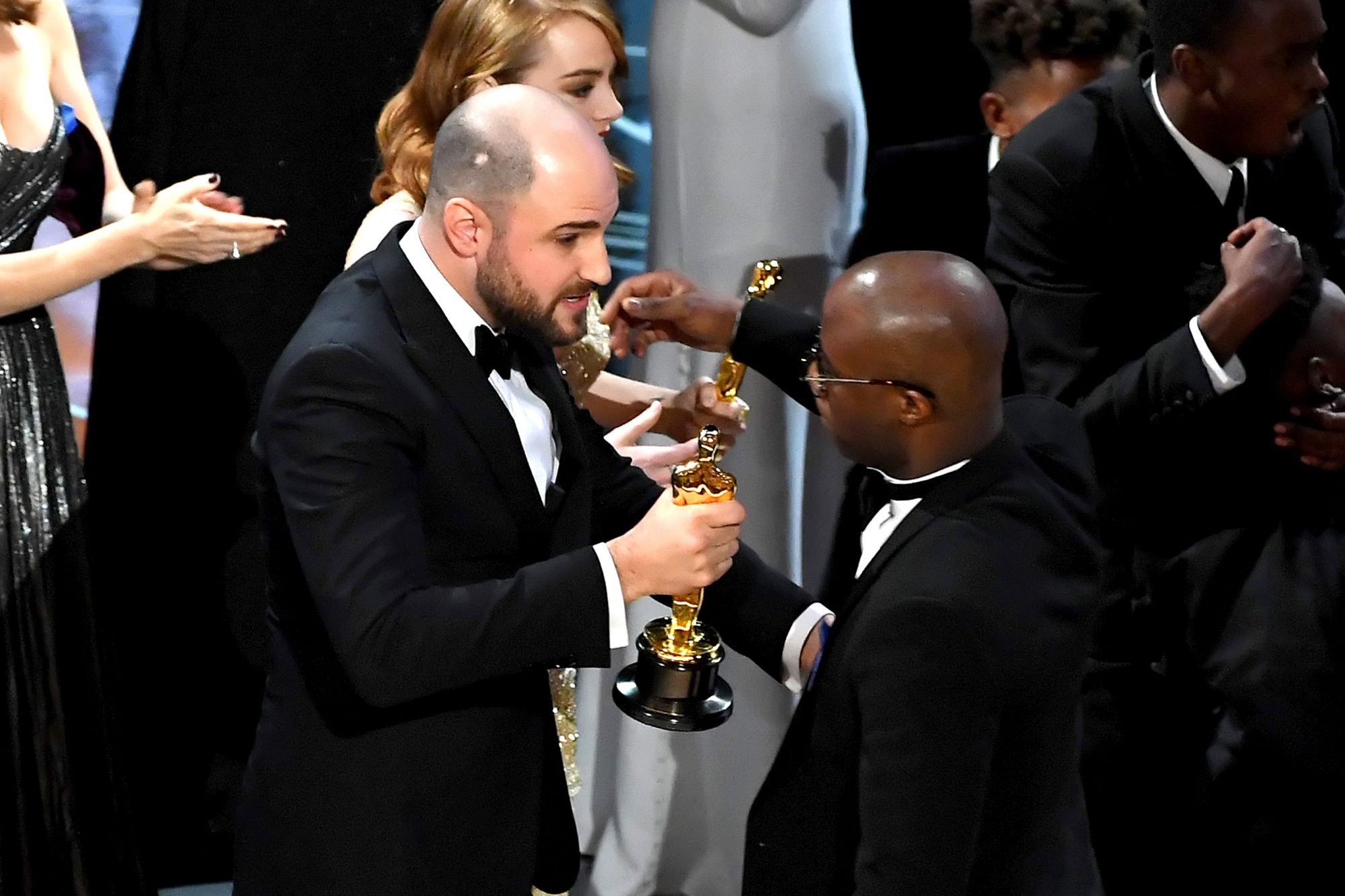 Across all 24 categories, Marisa Tomei’s Best Supporting Actress win for the 1992 film My Cousin Vinny, is one of the most talked-about and memorable Oscar Upsets of all time. Tomei’s performance in the film was great and screen-stealing, but no one was expecting her to win as two of her fellow nominees included Vanessa Redgrave for her performance in Howards End and Judy Davis for her performance in Husbands and Wives.

At the 45th Academy Awards, The Godfather and Cabaret received the most nominations with 10 each and were the heavy favorites across all the categories they were nominated for. The Godfather ended up winning three awards, including Best Picture, while Cabaret won eight (the record for the most Oscars won without winning Best Picture).

However, one of the biggest Oscar Upsets ever took place that year when The Best Director prize was awarded to Bob Fosse, the director of Cabaret, over a young Francis Ford Coppola, the director of The Godfather. Coppola was upset about the result, as when he won the honor two years later for The Godfather Part II, the first thing he said in his acceptance speech was “I almost won this a couple of years ago for the first half of the same picture.”

When you look at who was nominated in the Best Director category at the 85th Academy Awards, one would agree that Ang Lee (who won his second Best Director Oscar that night) deserved to win for Life of Pi. The Taiwanese Director’s fellow nominees are also the reason why his victory can be argued as one of the biggest Oscar Upsets ever.

Across the awards circuit for films released in 2012, Ben Affleck won almost every major Best Director Accolade for Argo (which went on to win Best Picture at the Oscars). Although many believed Affleck secured the Best Director Oscar, he faced fierce competition (throughout awards season) from former Best Director winner Kathryn Bigelow (the first and only woman to win the award) for Zero Dark Thirty. When the Oscar Nominations were announced for the 85th Academy Awards, everyone was in shock when both Affleck and Bigelow failed to get nominated for Best Director.

With the two frontrunners out, the Best Director Oscar was a wide-open race. Ang Lee’s direction is fantastic in Life of Pi, but had Affleck and Bigelow been nominated, there’s no way he would have won.

One of the most infamous Oscar Upsets in the Best Picture Category took place at the 71st Awards Ceremony when Shakespeare in Love won the honor over Saving Private Ryan. Based on presenter Harrison Ford’s reaction, you can easily tell how disappointed he was and how big of an upset it was.

Besides Harvey Weinstein’s (One of the executive producers of Shakespeare in Love) campaigning skills/tactics, another reason that many argue as to why the war drama lost Best Picture is due to The Thin Red Line (another war drama) also being up in the category as well. As both Saving Private Ryan and The Thin Red Line were war dramas, the former possibly lost several votes, which left to Shakespeare in Love receiving the highest total.

Three 6 Mafia winning Best Original Song for “It’s Hard Out There For A Pimp” wasn’t the only other surprise win at the 78th Academy Awards. Crash winning Best Picture that year over Brokeback Mountain is ranked near the top for the greatest Oscar Upsets of all time. It led to speculations of homophobia (Brokeback Mountain is about two gay cowboys) from Academy voters (the majority of whom were older white men at the time).

Jack Nicholson’s, who presented the Best Picture Award that year, reaction represented everyone when Crash was announced as the winner. When media outlets release their rankings of all the Best Picture Oscar Winners each year heading into the telecast, Crash is often ranked as one of the worst Best Picture Winners.

From the 15 Oscar Upsets listed above, which results stunned you the most? Are there any not on this list that you consider being a huge upset? Let us know your answers to both questions down below in the comments section!

What Not To Wear When You’re Rushing A Sorority