October through December is arguably the best time of the year. With Halloween, Thanksgiving, Christmas, and the New Year, there’s a lot to celebrate! Everyone seems to skip straight to Christmas, overlooking Thanksgiving completely. To hopefully put people in a Thanksgiving mood, we compiled a list of some of the best Thanksgiving episodes that you should definitely watch again this year.

Friends: The One With All The Thanksgivings

There are so many episodes that could have applied here, but unfortunately, I had to narrow it down to one. In this episode, the friends all sit in Monica’s apartment in a post-Thanksgiving meal haze and reminisce on their worst Thanksgivings: Chandler learning about his parent’s divorce, Phoebe losing an arm during the Revolutionary War in a past life, Joey getting his head stuck in a turkey, and Ross being in the middle of a divorce and eviction. Rachel says she knows what Monica’s worst Thanksgiving is and tells the group about the first time Monica met Chandler who called her fat. When the boys come back for Thanksgiving next year, Chandler is all over Monica after she lost a lot of weight. She flirts with him to get revenge and accidentally cuts part of his toe off in the process (awkward).

Every episode of Gossip Girl is dramatic AF and Thanksgiving only adds fuel to the fire. Dan invites Serena and her family to spend Thanksgiving with his family after hearing they were going to spend it alone at The Palace. This sweet gesture by Dan put former flames, Rufus and Lily in the uncomfy position of hiding their complicated romantic history from their kids. Meanwhile, Blair spirals out of control after learning that her dad won’t be coming home to spend their favorite holiday together.

It’s their first Thanksgiving as a married couple, and Lily is obsessed with making sure it’s perfect for Marshall and the rest of the gang. Meanwhile, Marshall is terrorizing Barney with the impending third slap from the bet he lost earlier in the series, and Ted and Robin revealed that they slept together the night before while they were baking pies. They eventually talk it out and go back and forth about whether or not they should still be friends eventually realizing they still have a connection after Robin’s boyfriend says “major buzzkill” and they both give a military salute which becomes one of the most famous (or infamous depending on how you look at it) running jokes on the show.

Mercedes, Mike, Puck, Quinn, and Santana head back home for the holidays. Kurt and Rachel decide to stay in New York to avoid the drama (which FYI breaks the promise they made before graduation to return to McKinley for vacations). Finn pairs up the McKinley High graduates with the new joiners of New Directions to prepare them for Sectionals. Meanwhile, in NYC, Kurt invites his boss Isabelle (aka Sarah Jessica Parker!!!) to spend Thanksgiving with Rachel and him. Glee always brings the drama, and this episode is no exception.

It’s never dull in Stars Hollow, but the holidays are especially entertaining… for those of us watching at least. It’s Thanksgiving in Stars Hollow, and Lorelai and Rory have been invited to FOUR different Thanksgiving dinners. At the Kim’s, Lane somehow got her non-Korean kinda boyfriend Dave invited and Lorelai and Rory are forced to eat Tofurkey; at Luke’s, they have an awkward dinner with Luke and Jess; at Sookie’s, where Jackson’s family somehow deep-fried the turkey and pretty much everything else; and Emily and Richard’s where Rory announced that she applied to Yale.

The Top 10 Up And Coming Couples Costumes 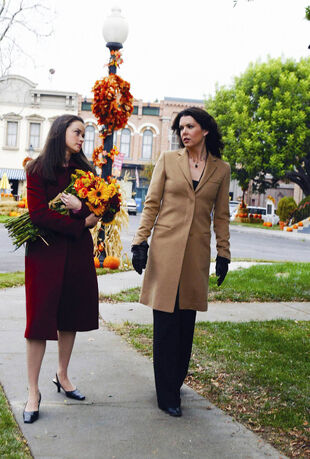 You guys know I couldn’t finish this list without including A Charlie Brown Thanksgiving, right? While it doesn’t necessarily fit in with the rest of the list, it’s iconic enough to make the cut anyway. Charlie Brown and Sally are going to their grandma’s house for Thanksgiving dinner when Peppermint Patty calls Charlie and invites herself over for dinner soon followed by her adding Marcie and Franklin to the guest list as well. Linus suggests that Charlie should have two dinners, one for Patty and her friends and the other with his grandma. Their Friendsgiving meal consists of the following: buttered toast, pretzel sticks, popcorn, jelly beans, and an ice cream sundae which leads to Patty getting upset and yelling at Charlie. She ultimately realizes that Charlie did the best that he could and apologized to him. After finding out that their friends hadn’t eaten yet, Charlie and Sally’s grandmother invited them all over for dinner which earned cheers from them all.

Honorable Mention: “The One With the Rumor”

Can be found in Season 8, Episode 9

I just really couldn’t leave this one out. Brad Pitt? In one of the iconic Friends’ Thanksgiving episodes? It was too good to pass up. In this episode, Monica decides not to make a turkey because no one would eat it, but Joey convinces her to after making the announcement that he’ll eat the whole thing himself (spoiler alert: he did). Monica tells the gang that she invited over one of her friends from high school, Will aka Brad Pitt. Rachel doesn’t remember him but that might have to do with the fact that he dropped 150 pounds since the last time she saw him. Throughout dinner, Will is hostile towards Rachel and eventually reminds her that she was mean to him in high school. She feels bad and tries to apologize until he reveals that he co-created the “I Hate Rachel Green” Club with Ross. He also revealed that they were the ones who spread the rumor that Rachel was a hermaphrodite to their school.

Did I miss any of your favorite Thanksgiving episodes? Let me know in the comments below! Happy Thanksgiving!

10 Things That Only Leaving Home Can Teach You