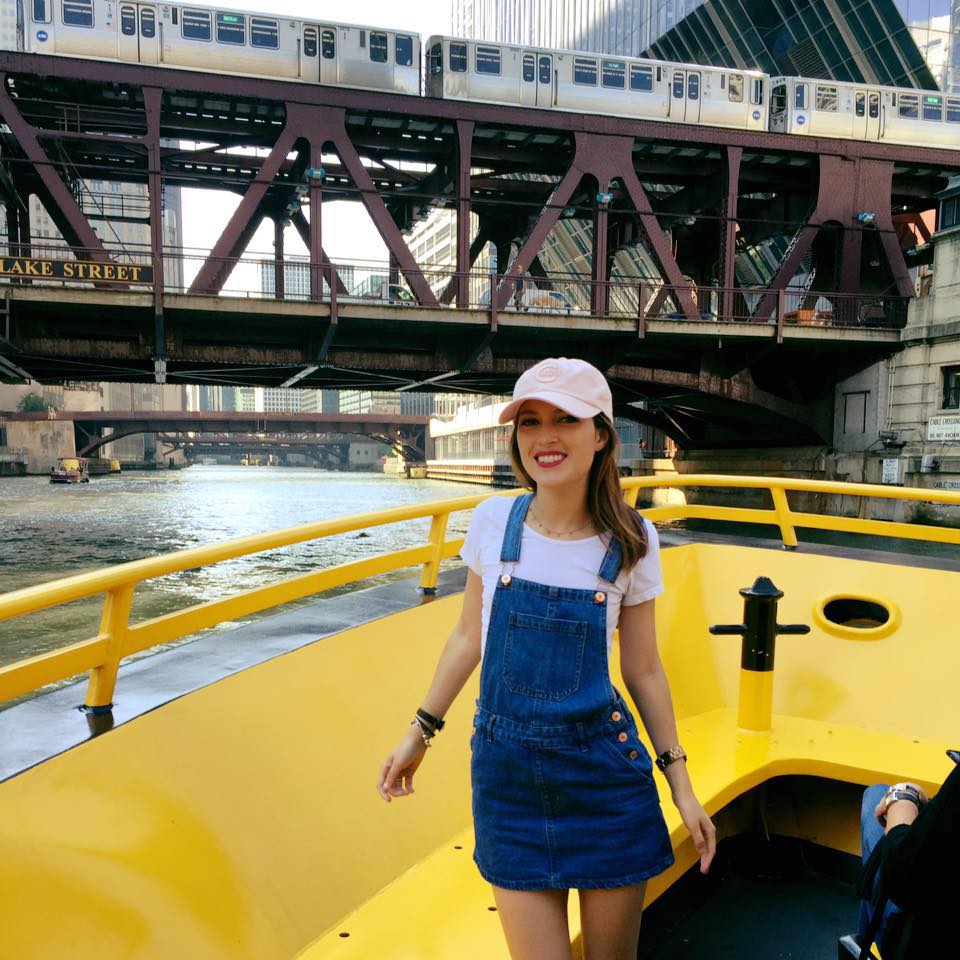 Nicole Long is a Digital Marketing and Advertising professional living…

10 Memories Of Growing Up In Louisville

Some people make New Year’s resolutions to get to the gym 5 times a week, I make them to get to different breweries every weekend. Different folks, different strokes. In any case, my “research” has made me a self-proclaimed amateur beer enthusiast and therefore qualified to share my findings. I’ve made it my personal goal to make it to the best breweries in Chicago, IL this year.

Yep. That’s me wearing protective eye goggles in front of a giant wall of beer cans. You’re probably wondering how I ended up in this situation. Well to tell you the truth, in a city with as many beer producers as Chicago, it’s hard not to find yourself knee deep in the hoppy stuff.

Starting off the list with a long-awaited arrival to the Chicago taproom scene is Off Color’s new Mousetrap facility. Shiny, new, and always hoppin’ (see what I did there). The space is big enough to bring your whole crew. Come for the good vibes and unique beer offerings. IPA lovers beware, you won’t find too many hazy options here. You also won’t find food on the menu, but Pizzeria Bebu’s got a delivery partnership with the taproom so you’ll be set on carbs. Tours of the brewery take place on Sundays and are free to the public. They cap at 12 visitors and it’s first come first serve, so you better hop to it! (Okay, I’m done, I’m done.)

The folks at Half Acre have two distinctly unique taprooms, but for our purposes I’m going to refer to the original in Lincoln Square because A) I have yet to make it to their newest location on Balmoral and B) this location has burritos. In addition to high quality burritos to soak up the suds, custom flights are available from the signature and rotating beer menu. I would be remiss not to mention that this spot also puts you near other prime watering holes (think Fountainhead and the Northman cider tavern), should the mood arise to keep the good times flowing. Tours take place every Saturday at 11 a.m. and will put you back a mere $10. The price also includes 3 samples and a souvenir pint glass. Tours are capped at 60 people so get there early to secure your Golden Ticket (Yes, a novelty ticket really is involved).

Breaking away from the traditional Chicago beer and bar food format, this female-owned and operated newcomer sets itself apart in more ways than one. This is apparent from the moment you arrive, as the operation is housed inside of a converted Masonic temple. As far as drink offerings, there’s something for everyone. Along with Eris’ signature ciders and beers, they’ve got rotating guest brews from other Chicago breweries and beyond. I’m not a cider fan myself, but I’d encourage you to check out their offerings as it’s what they’re known for. Opt for the Delicate Flower – A cider of the apple variety with notes of Chamomile and Lavender, if you’re looking for a solid sample. The gorgeously renovated interior houses tables and booths for dining from their food menu, as well as a first come first serve bar area, but any seat in the building is going to have you waiting quite a bit as the space gets busy.

No list of the best breweries in Chicago, IL would be complete without a mention of this Petaluma based operation’s massive Midwest outpost. Chances are, you’ve seen the entrance to Lagunitas documented in a friend’s Snapchat story. The black-light, neon framed hallway with the creepy Charlie and the Chocolate Factory theme music playing. Just getting in to the building is an experience in and of itself. The magic doesn’t stop there, though. Once you’re inside, you can either go to the smaller taproom, the brewpub for food, or to take the tour. Trust me, you want to take the tour. Given that the building is a converted movie sound stage that was used in the likes of The Dark Knight, (Remember this scene?)

Walking through the building while taking in facts and tidbits from the charismatic tour guides is half the fun. Tours, according to their website, are every freakin’ day (their words, not mine)! Explore Pilsen afterwards for authentic Mexican cuisine and a killer punch bowl at Punch House under Dusek’s.

As a quintessential Chicago beer brand, it’s more than likely you’re familiar with Revolution’s famed Anti-Hero IPA or Eugene Porter. If you’re a fan, you should check out their huge Avondale taproom and brewery. If you’re not a fan, you should still go. Out of all of the brewery tours I’ve taken so far, this one was one of the most impressive. The tour itself feels interactive because of the tour guide on hand to answer questions. Also, being able to walk through each section of the production floor with stylin’ protective goggles was pretty sweet.

The free beer at the beginning didn’t hurt either. Tours run through the week and are free! As for the taproom itself, long tables and open spaces with shuffleboard tables scattered throughout make this an easy choice for groups or surprise birthday parties. My birthday is December 1st in case anyone gets any ideas.

3 words: beer, oysters, chocolate cake. You can find all three of them at this sleek Pilsen brewery touting “culinary” beers and a fireplace. Out of all the best breweries in Chicago, IL, this one gets definite brownie points for the fireplace. Getting back to the beer, you’ll find unique flavors like Caramel Chocolate Churro Baltic Porter. Flavors such as this are meant to be balanced and complimented by the single salty (oysters) and sweet (chocolate cake) menu items. Tours take place on the weekends and take guests through the production rooms while discussing the culinary philosophies of the various taste profiles. You’ll also get a free pint glass to take home! Call 312-600-5111 to reserve or make your reservation at the tasting room as space is limited.

With a yuuge, dare I say… tremendous? operation near the West Loop and a spot in the Anheuser-Busch portfolio, Goose Island is one of Chicago’s most well-known beer exports and one of the best breweries in Chicago, IL. Odds are you’ve had their signature 312 Urban Wheat Ale at a windy city bar or two. Well now you can try that and so much more at their taproom on the premises. Take a tour from Wednesday to Sunday while you’re at it. Tours are available to reserve here and start at $12 for a 45 minute experience complete with a souvenir glass to take home at the end. Note: Come back in the summer for their annual 312 Block Party with live music, tasting stations and a chance to party with a couple thousand of your closest friends.

This new Bridgeport brewery was a long time coming, with beer lovers from Chicago and beyond lining down the block on opening weekend last month to get a taste of this eclectic brewer’s offerings. The beers are described as “creative.” Not surprisingly, as the brewers describe themselves as artists, and it’s apparent by their famed beer bottle and can designs. Also apparent is the artistic detail that went in to the interior of the space. So if you’re looking for an #instaworthy background for your beer pic, this would be the place to go out of the best breweries in Chicago, IL.

Touting itself as “Chicago’s first botanic brewery,” West Town’s Forbidden Root is one of the more unique spots on the list of the best breweries in Chicago, IL for good reason. Blurring the line between full-fledged restaurant and operational brewery, this spot is ideal for getting a  good meal paired with funky artisan brews. With cheese plates and malted lamb ribs, think of it as bar food elevated. Mark this one down for where to bring your foodie friend or that one friend that’s just a bit of a beer snob. Everybody wins!

Okay, I cheated. I’m runnin’ out of space here, okay? Here’s a one-two punch for you: Two distinct breweries right down the alley from each other in the Ravenswood Industrial Corridor. At Begyle you’ll find an open production area and fun flights. Not to mention a $10 tour at noon on Saturdays that includes a free tulip glass and three, free pours. They have tons of events and best of all, a skee-ball league. Sold.

On the other hand, you’ve got Dovetail running their small but fierce taproom just a few seconds walk away. They’re running with a solid Bavarian theme with German pub food like house-made pretzels and bratwurst. Plus, they’ve got beers reminiscent of the old country to match. European styles like the Dunkelweizen, Vienna Lager, and the smoky Grodziskie are peppered throughout the beverage menu. Come in with an open-mind and taste palate. Prost!

In summation of my very scientific findings, Chicago is a city with no shortage of beer and places to find it. With newcomers popping up every day, and even more companies bringing their operations to the Windy City, there’s no sign of stopping.

Now grab some friends and start beer-venturing to the best breweries in Chicago, IL. If you see me at one of these spots or beyond, let me buy you a cold one. Cheers!

Let us know what you think about the best breweries in Chicago, IL in the comments below!

Nicole Long is a Digital Marketing and Advertising professional living and eating in Chicago, IL by way of Orange County, California, and later, Bloomington, Indiana, where she graduated in 2016 from Indiana University (Go Hoosiers!) with a degree in Informatics. When she's not eating mac 'n cheese or throwing back Malört, you can find her in the audience of a comedy show or travelling - Usually to her beloved motherland of Brazil. Likes: patio szn, the Cubs, sushi, boozy milkshakes, open-mindedness, red wine, string lights, Maker's on the rocks, and she never met a cheese she didn't like.

10 Memories Of Growing Up In Louisville