1. You walk in step with everyone.

No matter where you are, you always end up walking in step with everyone; and it’s the worst when there’s a group of three and one person is out of step.

2. Nothing will ever be as glorious as a Gush and Go.

After marching for hours on end, hearing the words “water break” meant everyone stormed to the sideline because water was a blessing.

3. You fall into step when you hear a song in public.

Whether you’re at a store or a festival, you end up walking in step. It just feels wrong if you don’t.

4. You randomly hum the songs from old shows.

Out of nowhere, an old show tune will pop into your head and you’ll start humming the whole program… for the rest of the day.

5. You could spend all day in the sun, in middle of July, and not be bothered.

After spending weeks in band camp, you could stand in the sun in the middle of the summer, and not be bothered at all…because nothing will ever be as hot as band camp was.

6. Every song you hear could be made into a marching show.

You start to put different songs together, making your perfect marching show. That is, until you hear a new song and put together a whole new theme.

7. You love your old drumline cadences-even if you weren’t actually in drumline.

There was something about drumline playing their cadences, that made you so proud to be in marching band, that you will never truly forget. 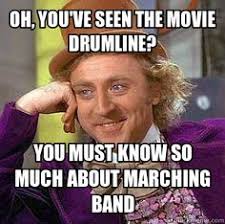 8. You loved everything DCI.

You had your favorite (Phantom Regiment all the way) and you were so proud of everything they did. You’ve also made your non-marching friends watch 12 minute show videos with you…which never went over well.

9. When looking at colleges, you always checked out their marching band.

College tours were important for deciding where to go to school, but if they didn’t have a marching band, it was no deal.

10. You’re early to everything.

Early is on time. On time is late. And late is unacceptable. For everything, ever. But especially marching rehearsal.

11. You love seeing any marching band.

When you’re at a Fourth of July parade, or any festival, and a high school marching band marches by, you get all excited and feel so proud. Even if you have no idea who they are.

Regardless of thunderstorms, flooding, high heat and humidity, marching band rehearsal was never cancelled. Ever. 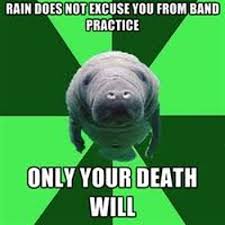 13. You judge people based on the instrument they played.

When they say they played trumpet, it explains everything.

It gave you a pounding headache, and it hasn’t ever really gone away.

15. You can do pretty much anything in a moving vehicle.

After many trips on a school bus, full of high school kids with uniforms and instruments, you can change, eat, sleep, or do almost anything in a moving vehicle now.

16. You own TONS of long black or white socks.

17. You catch yourself conducting.

18. You get annoyed when a crowd can’t clap together at a concert.

It’s seriously not that hard to clap together, but people just can’t seem to get the hang of it.

After spending weeks out in the sun for hours at a time, odd tan lines are nothing new to you.

20. You understand the phrase “the show must go on”.

Regardless of anything, you know the show must go on. At the end of the day, we’re performers and we love to perform music- no matter what’s going on behind the scenes. It’s helped you push through difficult times in order to come together and give a great show.

These are 20 relatable signs you were in marching band in high school. Which one could you relate to most? Share in the comments!

10 Things To Look For In A Roommate

10 Emerging Artists You Need To Add To Your Playlist