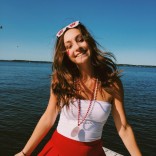 Hi! My name is Allison and I'm a senior at…

10 Movies To Get You In The Halloween Spirit

Whether you think of her as the true Queen of Westeros, the Breaker of Chains, or the Mad Queen who burned King’s Landing (ouch, too soon), Daenerys Targaryen will forever be the female boss that conquered the Seven Kingdoms. Although she was given a bad rep in the last season of Game of Thrones that aired this year, the Mother of Dragons will never be forgotten, and neither will this Halloween costume!

If you want to dress up as Dany for Halloween this year, you’ll definitely need a long, flowy dress and a blonde, braided wig. The Mother of Dragons is nothing without her babies, so carry around a stuffed dragon for added effect.

To take the costume a step further, include a Starbucks cup in your ensemble to reference the accidental coffee cup that appeared next to Daenerys on a table in Winterfell in episode four. The misplaced Starbucks cup in season eight of Game of Thrones was a viral sensation, and surely adding this to your costume will be too!

The U.S. women’s soccer team excited fans across the nation this year when they won the FIFA Women’s World Cup for the fourth time. A team captain and vocal political spokesperson, Megan Rapinoe was undoubtedly the leader of the team and the face of the women’s rights movement this year. She is a kick-ass soccer player and an icon for female athletes everywhere. If you dress as her for Halloween, you’ll definitely feel like a champion.

To go as Megan Rapinoe for Halloween this year, you’ll need a lavender pixie wig, a white soccer jersey, and, of course, a first-place medal. Cleats and knee-socks are optional, but confidence and fierceness are not.

Ashley O is by far my favorite costume on this list, and I will definitely be stealing this one for my Halloween party. Otherwise known as Miley Cyrus’ character from Black Mirror, Ashley O is a global superstar who was forced to produce bubblegum pop music by her management team, even after being placed into a coma.

During the episode, Ashley O has a doll named Ashley Too that eventually helps her escape from her life as a trapped celebrity. While the episode shines a light on the harsh realities of celebrity culture, Black Mirror fans went crazy for Miley Cyrus’ portrayal of Ashley O. Miley even released two of the songs from the episode (and yes, I still listen to them regularly).

You’ll be “on a roll” if you choose to dress as Ashley O for Halloween this year. To achieve the look, wear a white latex crop-top and some tight, silver shorts, with a purple wig to top it all off. Although you can’t actually buy your own Ashley Too doll (I checked), any small, robot-looking figure will do the trick.

Not a girl, not a robot, but definitely a “forking” amazing choice for a Halloween costume. Janet is the source for all of the information in NBC’s The Good Place, and she can provide any object to any person on command.  She lives in a boundless void, she marries an amateur DJ, and she is definitely one of the most lovable characters on the show. Why wouldn’t you want to be an all-knowing “magical robot lady?”

To dress as Janet for your Halloween party, you’ll need a patterned blouse, a purple vest, and a purple skirt. You can also carry around a cactus throughout the night to reference Janet’s reboot in the first season (if you don’t know what I’m talking about, watch episode 8). Or, you can use your powers to summon up drinks for your friends. Either way, you know everything in the universe, so use your powers wisely.

The Area 51 memes took over social media in 2019 and became the funniest joke in the galaxy. The meme started when a Facebook event called “Storm Area 51, They Can’t Stop All Of Us” attracted over 1 million respondents.

Since then, Area 51 memes have populated Facebook, Instagram, Twitter, and Reddit for months, each more hilarious than the last. While many internet trolls have thought of elaborate escape routes or names for their pet Alien, you can take the meme a step further by actually being an alien for Halloween!

To dress up as an alien from Area 51, you’ll need a silver, shiny outfit and some DIY antennas for added effect. To complete the look, apply a little (or a lot) of sparkly body glitter, and feel free to get creative with your makeup!

As long as you come in peace, your costume will be out of this world.

Time to take your horse to the old town road, and ride ‘til you can’t no more. Lil Nas X and Billy Ray Cyrus made music history this year when their song “Old Town Road” (maybe you’ve heard of it?) was #1 on the Billboard Hot 100 chart for 17 weeks in a row. They had the longest-running No. 1 single in Billboard’s history, and they are true country-rap icons. If you and your friend are looking for a costume to do together, this one will definitely spark some laughs (and some yeehaws)!

To dress up as Lil Nas X and Billy Ray, you’ll both need a colorful, fringe jacket with lots of bling. Feel free to super-glue some jewels from the craft store onto your jacket yourselves. A pair of cowboy boots and a cowboy hat will tie the entire look together. Just remember: can’t nobody tell you nothin’.

If you just took a DNA test and you’re 100 percent that bitch, then Lizzo is the costume for you. Lizzo crushed the charts with “Truth Hurts” this year, and her songs “Good As Hell,” and “Juice,” are girl anthems for when you want to feel like a bad bitch (noncommittal).

To dress up as Lizzo this year for Halloween, you’ll need a long, curly black wig, a sparkly long-sleeved bodysuit, and some high heels to top it all off. Do your hair tossed, check your nails, and you’ll feel good as hell at your Halloween costume party this year.

Ariana Grande dominated the pop music charts in 2019, and she shows no signs of slowing down. Her recent album was a massive success, and her singles “7 rings,” “break up with your girlfriend, i’m bored,” and “thank u, next” were my ultimate summer jams.  Ariana’s music makes me want to dress up like an Insta baddie and seduce random men at the bar, only to steal their drinks and hit the dance floor with my BFFs. Ariana is the definition of female empowerment and sexiness, so channeling all of her fierceness into your costume will have you feeling yourself all night long.

If you want to dress as the queen of pop for your Halloween costume party, there are a few of her show-stopping looks that you can copy. Of course, there’s her classic album-cover look with the high ponytail, black dress, and bunny face mask. Or, you and your friends could copy her 80s throwback styles from the “thank u, next” music video.

For a more casual Ariana look, some knee-high boots and an oversized sweatshirt is the perfect way to go. Regardless of what Ariana look you choose, be sure to rock the high ponytail, and remind me to keep my boyfriend away from you.

This is probably one of the easiest, yet most creative costumes to wear for your Halloween party this year. Billie Eilish has been every Tumblr girl’s obsession, and her unique music style has practically taken over the pop industry.

Although she’s only 17, Billie Eilish could be this generation’s Lana Del Rey with her edgy looks and dark electro-pop sound. Not only is her music alternative and creative, but so is her fashion sense. To dress as Billie Eilish for Halloween, you’ll need a pair of neon-colored sweatpants and an oversized sweatshirt to match. Some chunky sneakers and a green or blue wig are the ideal accessories to perfect the look. You’ll definitely be the bad guy but in the best way possible.

If you are inspired by retro 80s fashion, or if you binged all of Stranger Things season 3 like I did, then Eleven is the perfect costume for you. Eleven is the OG when it comes to pop-culture Halloween costumes, so she had to be put on this list. When Stranger Things premiered in 2016, Eleven was the go-to costume of the year. However, you still can’t go wrong if you decide to channel your telepathic abilities for the night and rock this classic costume.

To dress as Eleven from Stranger things for Halloween this year, you’ll need a pink dress, a navy blue jacket, and a box of Eggo waffles. Bonus points if you have fake blood dripping down your nose.

Do you have any other ideas for pop-culture Halloween costumes for 2019? Share them below! 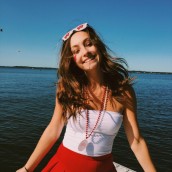 Hi! My name is Allison and I'm a senior at UW-Madison majoring in Strategic Communication and Political Science. When I'm not fueling my passion for writing with my coffee addiction, you can find me listening to live music or binge-watching Parks and Rec.

10 Movies To Get You In The Halloween Spirit