Ruby Rose Fox made it this year to the Boston Globe’s list of “10 Bands and Solo Artists to Watch in 2015.” In 2014 she was the winner of the Boston Music Awards for Best Female Vocalist and was nominated as singer and songwriter of the year.

Her songs are soul-driven, edgy, with a rock and roll vibe. She also writes all her own music. “I am not that good. I know some songwriters who can write in any genre and create all sort of cool crazy things. I just tend to make what comes out of me and I write a lot of bad songs that never see the light of day,” she admits modestly.

I met Ruby Rose Fox on a Saturday morning in a small café in Jamaica Plain, MA, where she lives. She has a hipster look; long black hair with bangs, jeans and a beige coat. Although she says she’s not a morning person, Ruby Rose looks great and is on time for the interview, even though she has to shoot a video that same afternoon.

When I ask her how she finds inspiration for her songs, she struggles for an answer. Her lyrics come out of things that she is interested in or curious about. “I got really obsessed about US presidents for a while and watched everything I could, and that ended into a song called Ronald Reagan Killed the Radio.” For Ruby Rose the process of writing is mostly intuitive, not premeditated.

Born in Brookline, MA, she has been interested in performing arts since she was very young, but it her took her a while to figure out how to focus her career. She wrote the song, “Histeria,” at age 15 and studied classical music at Berklee, her final year of high school. For college she studied theater at Emerson, where she did a lot of training on stage as an actress. She recommends not going to school to be a musician because, for her, you just learn as you go.

“My mom is a scientist and my dad is an engineer at IBM. My grandmother, on my mother’s side, was a piano teacher and my other grandmother whose name (Ruby Rose Fox) I took, was an actress. So there’s art if you skip a generation,” she explains about her family background.

In college she found herself artistically limited by the theater scene. When she focused more on songwriting, her career evolved and moved faster than acting.

Fox is focused on improving herself and says she’s at a point where she’s stopped comparing herself with anyone else. “From the moment in 2011 when I picked up an acoustic guitar for the first time and tried to play, it was never about anybody else, and I only set the goal that every performance be better than the last.”

She loves to be on the road, but Boston has been her home for a long time, which is why she always wants to come back. With her current band she has performed on the east and west coast, but Ruby Rose wants to travel, one of her goals is to perform abroad. Her biggest audience so far has been between 500 to 700 people.

Her band has evolved over the years. The current members are John Bragg, guitar; Chuck Ferreira, drummer; Matt Girard, bass; Meryl Ayres, Alex Asacker and Lauren Eicher as backing vocals. Last year she had five backup singers called The Steinems, and now they’re down to three. Fox likes to have women in her band too.

She found the band in the Boston music scene, which she describes as a cool community of people. But she assures that the scene is in transition right now, mainly because of clubs closing. “People are like, ‘where are the new bands going to play?’ There’s a lot of people who don’t know really what’s happening with this scene. Things are always changing.”

Ruby Rose doesn’t think there’s a record business anymore because music is readily available for free. She says she really doesn’t know what the music business is like nowadays.

For the last year, she has been writing her newest album, and with her band she’s about to finish the recording process. “I´m hoping it will be out by the spring. We have a fundraising campaign that well probably end soon.”

When I asked her what her biggest goal as a musician is, she says that having a sustainable life and a sustainable professional life is what she strives for. “The idea (of being famous) kind of freaks me out a little bit. I have the idea of being a really brave artist and making really good work and let the universe decide. Making a great living for music is something I definitely want.” 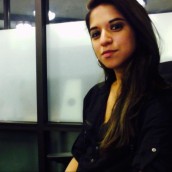 Mariana is graduate student at Emerson College. She’s doing an MA in Publishing and Writing and has experience as a journalist. She likes running on her free time.

The Ultimate Guide on How to be Healthy in College