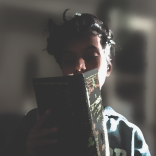 It is 2019 and fast food marketing and social media teams are always going that extra length to keep up with their consumers, social trends and fads, news media, and the latest major memes. A fast food chain’s social media presence often presents a certain tone. Denny’s twitter will roast you and Arby’s is always keeping up with video game and comic news with their food art. But this past week, KFC has taken the limelight and stepped it up with their very own game, and not just any run-of-the-mill game but their very own official dating sim: I Love You, Colonel Sanders! A Finger Lickin’ Good Dating Simulator.

If you lurked around or kept up with gaming Twitter a few weeks ago, you may have seen or hear of the rumor that KFC was creating a dating sim. A lot of people thought it was a joke and moved on after entertaining the idea for a bit because that’d be ridiculous, right? It is ridiculous but little did we know, KFC apparently doesn’t joke about making a dating sim.

So yes, it’s very real. KFC partnered with production company Psyop to create their own official dating sim. Now it’s available, with several YouTube and Twitch gaming channels like the Game Grumps and Achievement Hunter being sponsored to play this new dating sim and try to get Colonel Sanders to date them.

If you’re familiar with the dating sim genre of games, the KFC dating sim is a watered-down parody of Japanese dating sims and visual novels. From the character designs to the animated musical opening that introduces the main characters before you can even hit play to all the clichés and tropes in characters and plots, it isn’t trying very hard at all. As far as marketing ploys go, KFC really thought out of the bucket to market and advertise their new mac ‘n cheese bowls.

You heard me right, we have mac ‘n cheese bowls to thank for an official KFC dating sim. What timeline are we living in?

The basic premise of the game is that you, the player, are a culinary student at a prestigious university where the terms lasts three whole days and there seems to be only one class of less than ten students. On your first day, your best friend tells you about the new mystery student who is incredibly talented (not to mention handsome) and everyone’s talking about him. Spoilers, it’s Colonel Sanders.

The aim of the game is to get your cooking degree, and try to get Colonel Sanders to ask you to be his business partner AND his significant other.

It’s probably not the best idea for your new business partner to also be your new SO, but this is a dating sim where you’re trying to date an anime-styled, college-aged Colonel Sanders. By that point, reality is already far out of reach.

Other than Colonel Sanders who is the focus of the dating sim for obvious reasons, there are eight other characters you interact with over the course of your three-day culinary school term: the player’s best friend, your two rivals (one in love and both in profession), three other fellow students, a surprise creature, and a dog professor – yes, at this culinary school the professor is an actual dog. He’s a corgi in chef whites and his name is Sprinkles, but Professor Dog to you.

The Steam page for the dating sim also boasts of “cooking battles, battle battles, secret recipes, secret endings, and multiple hours of content.” One play-through of the game is maybe an hour depending on how fast you read and if you get to the end, but if you’re going for all the endings (or the best ending if you don’t manage it your first go), it has some replay-value that holds up to their promise of multiple hours of gameplay.

Music Artists Everybody Should Be Listening To

This is par for the course with the dating sim genre but cut down considerably. Most Japanese dating sims and visual novels can be four to five hours for one route and you might get a game over before reaching a defined ending and have to start over. The KFC dating sim does not require half as much commitment or investment as there are fewer endings and only one love interest to pursue. The dating sim isn’t difficult by any means but there are several immediate game over options where you can quit the game or retry the scene to get your perfect ending.

Your love and business interest

As is the goal of any dating sim, you want to get with a love interest. Where most dating sims provide you with several options to choose from, the KFC dating sim only gives you one man to pursue. But who else would you want if not a college-aged Colonel Sanders before he goes on to become the face and founder of a multi-million dollar fast food franchise?

And on top of all of that, the dating sim is filled with all sorts of little Easter Eggs ranging from a BTS poster to an actual Jo-Jo reference along with the basic tropes and cliches from anime and visual novels. The KFC dating sim is a meme that just keeps on meme-ing.

If you’re going to be critical, this isn’t a good game by any objective standard. It’s a blatant marketing stunt that KFC is very transparent about with the several references that Colonel Sanders makes of his yet-to-be franchise, well-known KFC products, and, of course, their new product that is the reason this dating sim even exists.

The KFC dating sim is FREE and available to download through Steam so what are you waiting for?

Have a go and let us know if you manage to capture Colonel Sander’s heart and stomach!

Reasons Why You Should Travel During Your 20s

10 Foods To Make You Glow That Celebrities Swear By