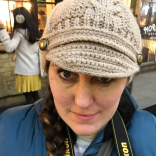 Hello. My name is Laurie. I’m a Denver native who…

10 Grammy Looks That We Are Dying To See

Hollywood.  Hollywood is the place you would expect to be when you ran into that one Celebrity.  You know the one. There is no mistaking or second glances to make sure you think you saw what you just saw.  You just know. But I wasn’t in Hollywood. I was in London. And in the blink of an eye, so was Sir Paul McCartney.

It makes sense that Paul McCartney is in London.

I mean he lives there after all.  But I never thought that 20-year-old me would ever run into him. Especially on my first ever visit to London.   I have always had a special place in my heart for England. It is my roots and I love visiting whenever I can. One summer in College, my mom, Aunt, cousins and I went to London for the very first time.  We joked all week about “having tea with the queen”, and running into Tom Cruise (who was doing a Movie Premiere there in Leicester Square.) We joked and laughed at the thought of that.

As our trip went on, my cousins left England.  We never met the queen and we never saw Tom Cruise. After all, I’m not one for crowds and as fun as it would be to actually go to a movie premiere, we chose against it.   Then one rainy day, my mom and I were walking around Leicester Square. The same one where the movie premieres happen. If you have never been to London, in a way, Leicester Square is similar in a way to Times Square.  There is shopping, movie theaters, restaurants, and events. It is right in the heart of London, next to Piccadilly Circus.

It was raining in Leicester Square and we decided to stop in a tiny little tourist shop to get our of the rain.

The shop was so small and at the time had a sign above it that said SWITZERLAND with bells on top of the sign. This tiny little shop had two small rows of souvenirs jam packed and the back wall was full of bags and shirts and hats.  There was hardly room to walk. Off to the side around a small corner, was this little nook inside the store. That’s where I was. In that nook were all the snow globes. I always collect snow globes of cities I have visited and I had my mind set on this one snow globe of London.

As I was admiring it, and deciding if I was going to buy it or not, my mom got my attention and told me to come see something. She insisted I did not want to “miss out”.  Confused, I set the snow globe down and wandered out of the nook to see what she was talking about.  I turned the corner and LITERALLY ran into a tall man. Immediately apologizing I looked up and could not believe that the man I just ran into was Paul McCartney. He quickly apologized but didn’t really acknowledge anything else.

“I knew for that moment I was standing next to a living legend.”

Here is the part where I  admit that I am not a huge Beatles fan. Why?  My parents didn’t really introduce us to much music as children, so I just never really got into them.  But I’m not stupid. I knew exactly who he was, and I knew for that moment I was standing next to a living legend.

Best Romance Movies That Will Speak To Your Soul

Before I could get another word out, the tourist standing right behind him figured out what was going on and started screaming and flashing her camera. ( This was before smartphones).  In her excitement, he tried to calm her down as he did not want to start a scene, but she was not having it. Still, screaming and taking pictures, Sir McCartney did not take well to this and promptly left the store, back out into the rain.

I was so in shock that I hardly realized how quickly he had come and gone. That awful tourist who scared him off. I really think if she hadn’t I would have a picture and a signed subway ticket of some sort to show off. But I only have the memory and my mom as a witness of running into a living legend.

“That tourist shop is no longer there, But that Switzerland sign with the bells on top still stands.”

I bought the snow globe, and of course, when I look at it, it reminds me of that day.  I have been to London several times since. I always go to Leicester square when I am there.  That tourist shop is no longer there, but the sign that says SWITZERLAND with the bells on top still stands. I think it must belong to a shop on the second floor.  I never knew what it was for. But I always walk by it and wonder what Sir Paul McCartney was doing in the tourist shop that day. I can only imagine he was getting out of the rain.  It is London after all.

What would you do if you ran into Paul McCartney? I know, I know, it would be all over Instagram, and believe me, if I had a smartphone back then this would be my 16-year-old Facebook profile picture.

Hello. My name is Laurie. I’m a Denver native who love spending my free time in the Rocky Mountains. My background is Theater and Art. I love to travel, write and explore. I spend most of my time with my husband and our two beagles named Hambone and Baroo. Being an artist, I have a comic strip about them called “The Beaglemans: The adventures of Hambone and Baroo.” That you can follow on Instagram. I also have written 2 full length plays, and love to dabble in short stories and kids books. I am a proud published playwright and children’s illustrator and love expanding my opportunities wherever they come from!

15 Signs You Grew Up In Jacksonville

10 Grammy Looks That We Are Dying To See

10 Notable Celebrities Who Have Tested Positive For The Coronavirus