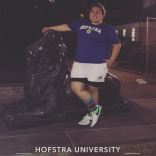 Going to college can be fun and unique in its own way. During my first year at college I had realized phrases that were commonly used amongst my colleagues and came to realize they were unique because only the students at Hofstra would understand them. Here are ten phrases that if you are one of the Hofstra students, you will understand!

“Do you want to get Smash tonight?”

Okay, I will admit that sounds a bit disturbing but I promise it’s not inappropriate at all. Smash burger is probably one of the most frequent visited food hubs on Hofstra’s campus. Between its thick shakes, awesome burgers, fries and tater tots, I don’t know anyone who would want to miss out on Smash at least once a week!

Well my friend, I guess we will never know. Hofstra consists of the Student Center Uni-span which is basically the most frequently used, the Nether-span which is right outside of the Netherlands resident’s hall and the Useless-span which is almost never used.

“It’s raining, I don’t want to walk to Breslin.”

Breslin Hall is located right outside the school of Comm. yet when it comes to rain, the only building many Hofstra students complain about walking to is Breslin. Breslin is a nice building but when it rains and it’s super hot in the hall, it’s not the best day for a Hofstra student.

“Meet me at Cafe on the quad, not corner.”

Well, the cafe on the quad is located directly on campus outside Roosevelt hall and the school of Comm.

Yes, it’s true! Our entire campus is full of cats and squirrels who we all love and appreciate dearly! Shhh, Hofstra cats are more pleasant.

10 Ways to Avoid Procrastination For The Lazy College Student

Dutch treats is our 24 hour convent store located at HOF-USA right near Smash burger. When it comes to late nights up studying, Dutch will be wiped out clean by its residents! We appreciate our Dutch workers!

“Want to catch the entertainment shuttle?”

If you’re a resident, most of the time Hofstra students don’t really have your own car on campus so if you want to go out on the weekends, you best make it to the entertainment shuttle and/or if you need to do a quick Target stop because who doesn’t?!

Yes, we all love our school just like every student should. At every sport event, reception or award night, “Go Pride” is shouted and/or projected on a screen. Who doesn’t love school pride?!

Which of these Hofstra students lingo do you use? Let us know in the comments.

How To Care For Curls: Cleansing And Conditioning

12 Thanksgiving Memes That Will Have You Laughing

30 Bee Puns That Are UnBeelivably Hilarious