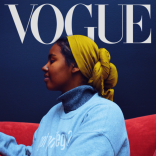 Female rappers have always been killing the game and, in the past few years, they have shown us that there is no such thing as one female rapper with a singular image and one sound. Instead, there can be versatility, range, style, and a variety when it comes to femme voice in rap and we’ve been living for it. Without further adieu, let’s remind ourselves the numerous hits women emcees blessed us with in the last few decades by listing 35 female rap songs we absolutely LIVE for!

We have to start this list with the one and only Queen Bee! This song was a 90s jam, with the Aaliyah cameo and the primary colored wigs with the floors to match! This was ICONIC, leaving us saying true!

Favorite line: “Imma throw shade if I can’t get paid/Blow up to your girl like the Army grenade”

Yesss Queen!  A female rap song that addressed important issues of sexual harassment and the usage of disrespectful language against women. This had us bopping our heads for several reasons, and rightfully so!

Favorite line: “But don’t you be calling me out my name/I bring wrath to those who disrespect me like a dame”

A quotable female rap song of the 2000s, we’ll never forget to make sure our lip gloss is poppin’ everywhere we go. Also, you HAVE to say poppin’ three times. You just have to.

This song is going down as one of the top 5 songs of the YEAR. Meg did her thing on this, TikTok was obsessed with the joint, and even the Bey Hive had to hop on it. Now, how did we not live for this song?

Not gonna lie, when I hear “Earl on the beat”, I become a different person. I know I’m not the only one out here. And that’s on, what? Period!

Probably the most influential rap songs to have ever lived. Ms. Lauryn Hill did her thing by reminding us that it’s not about chasing that thing, but by just being ourselves. And she’s still not wrong.

If you say you don’t like this song, I regret to inform you that you’re lying to yourself. Truth hurts. This female rap anthem is a song everybody loves and will bump to.

OG Nicki fans know that this song was THAT song that made her a legend right then and there. I spent nights trying to learn this perfectly, word for word, bar for bar.

Favorite line: “I think I’ll have a rap bitch for my entrée/’Cause they be thinkin’ they can spit, spit shine my shoes”

When we’re speaking spitting geniuses, you can’t disclude Azaelia Banks. Stylistically speaking, “212” is a song no one could have imagined during its release.

Favorite line: “They’ll forget your name soon/And won’t nobody be to blame but yourself, yeah”

You can’t think of female rap songs and not mention this 2002 hit. You just can’t. I know we all live for this song once we hear “all you ladies”. It’s game over after that.

Favorite line: “First, you gotta put your neck into it/Don’t stop, just do it, do it”

An instant hit, this single was enough to make Young M.A. a force to be reckoned with. Got us all saying ooouuu!

A timeless and iconic hit, this Missy Elliot single is still hot and played everywhere today. This song is a global phenomenon, putting futuristic rap on the map. If you know I’m right, put your hands up and say holla!!!

Favorite line: “Missy be puttin’ it down/I’m the hottest ’round”

It’s Flo Milli shit! Whether you heard it on TikTok or you heard it when it actually dropped, it really doesn’t matter. All that matters is that this is the official warmup song you’ll play before entering any function.

Favorite line: “Yeah, dicks up when I step up in the party (hey)/Yo main dude wanna feel on my body (he do)”

This was Dej Loaf’s breakout single, giving everybody a dose of that Detroit sound from a female rapper we all needed.

Favorite line: “Love wearin’ all black, you should see my closet/Rock that all white when I’m feelin’ Godly”

“Say So” is a huge Doja song that everyone knows the dance moves to and will forever have our hearts. This a unique rap song that showcases all of Doja’s vocal skills and talents!

Favorite line: “Let me check my chest, my breath right quick (ha)/He ain’t never seen it in a dress like this (ah)”

Following her long hiatus in rap, Remy Ma collaborated with fellow rappers French Montana and Fat Joe in “All The Way Up”. While the song is also credited as a Fat Joe record, there is no doubt that Remy stole the show in this one!

Everybody and their moms were rapping to this song back in 2018. “Bodak Yellow” was the song of the summer and made Cardi B a household name.

Favorite line: “These expensive, these is red bottoms/These is bloody shoes”

Don’t ever get it twisted, because Trina is THE baddest bitch and a queen of the South. This song right here proved just that and let everyone know who they were getting it in with.

Favorite line: “I’m representin’ for the bitches/All eyes on your riches”

Salt-N-Pepa are legends and are EVERYTHING for gracing us with this song. From the backing track to the dance moves, we all love to push it!

Out of all the female rap songs on this list, this is one that pushes young black girls to be unapologetic about their appearance and who they are in the world. A beautiful ode told through rap.

Favorite line: “Never busy/But her mind is occupied, she used to dream of high rises”

Giving us Keisha vibes from the Hype Williams film Belly, Kash Doll gave us a hard-hitting rap juxtaposed with pink, nostalgic visuals. Let’s just say this song is for everybody.

Favorite line: “Talking that shit but bae must I remind you?/I am that bitch, I will pull up and find you”

TikTok had us all rapping this song during quarantine all over the house, and we’re not mad about it. I still feel like a whole brand new bitch. BUSSIN’!

Favorite line: “I feel like a whole brand new bitch/Bussin’ (What?)”

Princess Nokia was a pillar of the New York underground and is now just entering the mainstream. Real ones know about “Tomboy” and we’re still living for it.

Favorite line: “It’s a guarantee that he won’t forget me/My body little, my soul is heavy”

Before TikTok, there was Musical.ly and it’s safe to say the app ate this song up! “Queen’s Speech Ep. 4” is a quotable English rap hit by Lady Leshurr that people still have in the back of their minds.

Songs To Listen To A.S.A.P.

One of the most famous rap pop songs in the 21st century, Nicki Minaj really came through with this song back in 2010. The world went nuts over it and we still love to recreate the video and chant the lyrics. Thank you, queen!

Favorite line: “And he ill, he real, he might gotta deal/He pop bottles and he got the right kind of build”

Lil’ Kim assembled the ’90s female dream team for this song in her debut album Hard Core. From the guest appearances in the video to the amazing features, this remix single was and is still a ladies’ rap anthem!

This Lauryn Hill joint is an unforgettable vocal performance, as the song is still being interpolated and sampled in hip hop music today. A catalog standout from a veteran we love!

Favorite line: “No one loves you more than me/And no one ever will”

Saweetie definitely did something when she made”My Type”, so much so that other artists like the City Girls and Jhené Aiko had to hop on the track. We all became an Icy Girl after this single.

Eve and Gwen Stefani did really blow our minds when they released this single. The song reminded many of us what hip hop feels like and to let go and have fun!

Favorite line: “Drop your glasses, shake your asses/Face screwed up like you having hot flashes”

For some reason, British female rap songs just hit different, with “Gangsta” being one of them. A TikTok dance craze and Darkoo’s biggest hit, this song has everyone moving and trying to master the lyrics.

Once again, Missy Elliot is a futuristic genius and has paved the way for many rappers that have entered this realm in rap. This record had us saying things and seeing things we never fathomed before.

Everyone knew this TikTok sound was a vibe before they knew the song’s title shared the same sentiments. An amazing rap record, the dance moves that go along with this are irresistible!

Favorite line: “If I back it up/Is it fat enough?”

Tierra Whack is a criminally underrated rapper who created the masterpiece Whack World. The video to “Hungry Hippo” allows you to have a glimpse of the Philly rapper’s mind. And it’s dope af!

Favorite line: “I like my diamonds and my pearls/I say thank you I designed it”

This is a song and artist that truly deserves their roses. A West Coast hit, Kamaiyah lets everyone know that to let people know you’ve made it, you better stunt when stunting is in order!

Favorite line: “Fuck it up, west side niggas know we fuck it up”

“Body” is just one of those cute songs that meander into your mind when you have a little crush on someone you’re undeniably attracted to. It’s also a club type song that has people feeling themselves every time it blasts from the speakers.

Favorite line: “Yo body on my body baby/I’m about to catch a body in here baby”

What is your favorite female rap song you live for? Tell us in the comments below!

12 Thanksgiving Memes That Will Have You Laughing