Having sex for the first time is made out to be a lot more than it ever really is. Chances are, things will get weird (really weird). The more open you are with the person you’re having sex with, the better off you both will be! Breathe and remember that it is something you’re supposed to have fun with and enjoy. If you are having second thoughts, it’s probably not time. But, if you’re ready, here is what you can expect when you lose your virginity!

You both most likely have no idea what to expect or what you should be doing. But, the bright side is everyone starts somewhere. Laugh about it and talk it out because that’s the only way it’s going to be less awkward. Just remember that she/he probably feels just as awk, so you aren’t alone!

2. Your or the person you’re having sex with may feel some normal pain/discomfort

Discomfort is very common, especially with women. Make sure to take things slow and that the person you’re having sex with is comfortable!

3. It isn’t going to be anything like the movies

The movies and shows you watch that involve first time sex are nothing like reality. You can go the extra mile and try to make things romantic, but it won’t change that it’s a brand new experience.

4. You most likely will only last for a few minutes (or less)

That doesn’t mean you aren’t good at sex. So, don’t worry, you’ll go longer the more you have sex.

5. She probably won’t have an orgasm

As mentioned before, things can feel really weird. This can cause her to tense up and will lessen the chances of having an orgasm. It’s important that you use plenty of foreplay to get her going!

6. There may be some blood

It’s normal for there to be spotting and a bit of blood. It doesn’t happen to all women, but a high percentage. Don’t freak out and make her feel weird about it. It is what it is.

7. The more communication you have, the better it will be

TALK, TALK, TALK. The more you both communicate, the better the sex will be.

8. Putting the condom on may be the hardest part

If you haven’t practiced putting it on, you may struggle.

9. You’ll most likely stay in missionary

Don’t expect any fantasies to come true on your first time. That comes with practice.

10. It will get SO MUCH better

Trust me. Sex can only get better from here!

Do you have any other things to expect when having sex for the first time?! Share in the comments below! 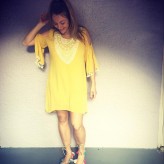 Non Monogamous Relationships: How Not To Be A D-Bag

Hook Ups With Your Floormates: Why It's A Bad Idea

10 Sex Positions That You Need To Try… NOW

5 Lingerie Outfit Ideas That Will Make Him Drool

Sexy Things You Can Do To Initiate Sex