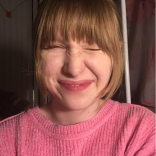 5 Foods That Can Improve Your Mental Health

As much as we all love Halloween, sometimes we’re a little short on cash and don’t want to spend it on make a costume. Or maybe you just don’t want to put the time into shopping for one! Either way, check out these 15 easy Halloween costumes you can make with things from your closet and a little DIY-ing to make picking a costume super easy this year!

1. If You’re Really Strapped For Time And You’re Willing To Sacrifice A White T-Shirt, This One’s For You

Really not feeling Halloween this year? Got distracted by tests? Or maybe you really don’t care about Halloween. Either way, this costume is so super easy and casual, it’s perfect for those of us who really just don’t feel like trying. You will have to sacrifice a t shirt for it, though. Just write “404: Costume Cannot Be Found” on your shirt, and pair it with literally whatever you want to wear and you’re all done. Now no one can get on you about not wearing a costume, though they still might complain about how you didn’t try. But at least you did something, right?

2. Have A Risky Business Moment (If You’re Cool With Not Wearing Pants)

This is a classic costume. You might have to borrow a dress shirt from a guy friend so it’s long enough, but this is such a super easy look to recreate (as long as you’re okay with your legs being bare). For a more appropriate look, you could wear this with bike shorts and even add some tights. You’ll need some sort of bottom, a button down, socks (preferably with the stripes!), and a pair of sunglasses. A friend to do it with you would also be pretty great!

3. Go With A Classic And Be Sandy From Grease

This is a costume that never goes out of style, because it’s just so classic. You may not have the exact pieces but you can get the look with a black shirt (preferably off the shoulder/low cut for a more similar look), black pants of some sort, and red heels. Or just red shoes, if you’re really not trying to walk around in heels at your party. If you want you can do the curls, but the only beauty thing that’s totally necessary for this look is some red lipstick! If you have a boy to dress up with, make him be Danny, or you can make your friend be “good” Sandy!

4. A Punny Outfit For The Nerd In You

Looking for something more on the clever side of things? Why not be life and hand out lemons? All you really need is a name tag that says “Hello My Name Is Life”, which you can print off the internet instead of buying a pack of those name tags since you’ll never use them, and some lemons. While you could go buy actual lemons, you could also just print pictures of lemons off the internet and cut them out for a cheaper and easier option. Plus this way if you’re handing them out you’re not forcing people at the party to carry an actual lemon around for the rest of the night. You could also hand out lemon flavored candy!

5. Be The Chill Pill Everyone Tells You To Take

If you’re a little more dramatic, people might tell you to take a chill pill more than you’d like. To poke fun at this, dress up as a chill pill for Halloween! This costume is so easy to make. Wear a white shirt on top and colored bottoms (they don’t necessarily have to be pink- red would be a good choice, too!), cut out the letters, and tape or pin them on! This is super easy and casual and you can totally make this last minute if you’re really stretched for time!

6. Another Pun But This One Gives You An Excuse To Wear That Fancy Dress In The Back Of Your Closet

We all have that dress or romper or outfit that’s really fancy that we brought to college hoping we’d have an excuse to wear it. Well, this is your excuse! Be a “formal apology” in your formal dress and with a sash that says “apology” on it. You could make this sash out of paper if you don’t have any white clothing you’d be willing to sacrifice to the cause. You might have to explain to people what you are, but at least you’ll get to wear that gorgeous dress!

7. Find A Friend To Be Serena And Blair With You From Gossip Girl

This costume is super easy to put together and a great option for a costume with friends. You probably have everything you need to make this costume in your closet, which is great! If you can’t make one of these looks work, they wear a lot of different variations of their uniforms throughout the show so you can totally take some liberties with it! Make sure you over accessorize and act just a little too dramatic all night to really sell it.

8. Really Feeling Lazy? Put On A Pink T Shirt, Grab A Blanket, And Be A Pig In A Blanket

If you’re just really not feeling Halloween, this costume is the perfect excuse to be super cozy all night. All you have to do is wear a pink shirt and wrap yourself in a blanket. Sure, you could get a snout to wear, but that seems like it would get super uncomfortable. This might not be the most costume-y costume, but at least you tried and you’ll be comfy all day.

This is another great costume for you if you’re not trying to be really extra this year. Be Damon at the end of Mean Girls with a simple blue hoodie and pair of sunglasses. So people aren’t asking you all night what you are, pin a sign to the front of your hoodie with the famous line from the scene (“She doesn’t even go here”). People who haven’t seen the movie might still ask, but at it’ll probably jog a few people’s memories.

10. If You’re Constantly Correcting People’s Grammar, This Costume’s For You!

This is a great costume for English majors or anyone who corrects people’s grammar and who wants to poke fun at themselves. You can pin the letters onto a t shirt or write it on a white shirt with a black sharpie and pair it with black pants, a belt, and some black shoes. If you’re trying to be casual, you can pull your inspiration from this picture, or you can make it a little sexier with shorts and some fishnets with some heels. It’s really up to you!

11. If You Really Love Fall, Why Not Be A Scarecrow?

Let’s be honest, fall is one of the best seasons if only because  of the fashion. If you’re really into autumn, you should celebrate the season by being a scarecrow for Halloween! Throw on a flannel and some overalls, or jeans if you don’t have any, add some boots and, if you’re feeling it, some face paint. This look is super easy to pull together but looks absolutely adorable!

12. For A More Vintage Look, Turn Yourself Into Rosie The Riveter

All you really need for this look is a bandana, red lipstick, and some sort of button up shirt you can roll up the sleeves on. Do a little more of a vintage make up look, throw your hair up, and you’ll already look super adorable! This costume is super appropriate for the current social climate as well since Rosie the Riveter is a total feminist icon!

13. Give Yourself A Fake Bruise And Be A Boxer

Looking for a more badass costume? Turn yourself into a boxer, complete with a fake bruise! Braid your hair into pig tails, through on some workout gear, and bust out the purple eyeshadow to give yourself a bruise. You might have to improvise for your boxing robe or forgo it, but either way you’re sure to look super intimidating but still adorable!

14. Ooh La La! Sure, No French Woman Actually Dresses Like This, But It’s Pretty Darn Cute

Yes, I totally realize this stereotype is completely inaccurate. To be fair, when people dress as an American they probably dress as an overweight Donald Trump supporter and that’s definitely not what we see everyday. All you have to do for this costume is throw on a black and white striped shirt, a black skirt or black pants, and some red heels. Maybe add a baguette to make it more obvious.

15. Be The Female Waldo And You Can Just Sit Back And Watch The Jokes Make Themselves

This is such an easy costume and it’s so classic! Be the female version of Waldo from Where’s Waldo by throwing on a red beanie, a red and white striped shirt, and some sort of pant. You’ll look super cute all night, be really comfy, and the “Where’s Waldo?” jokes will make themselves!

Are you going to give any of these a try this year? Let me know in the comments!

5 Foods That Can Improve Your Mental Health

10 DIY Crafts to Get You in the Holiday Spirit