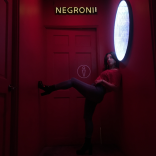 Hi! I'm a fashion designer based on San José, Costa…

We have all had a friend that has meet a match on one of this dating apps or maybe you are that friends. But some others are not that sure if these apps really work or are just meant to find someone who wants to sleep with you and that’s all. Some people also think that you are going to be kidnapped and are usually afraid of using dating apps. well you might meet the love of your life on one of this or have the worst date of the history of dates, there is no only choice when it comes to dating apps, that’s why we bring you some things you should probably want to know before start following the online dating trend.

For some people meeting people thru an app can be way easier than meeting others in real life. Especially when you have a tight schedule between work, school, your family or any other activities that take up your time. Dating apps have that benefit, they put you endless options from people that have your similar tastes in music or hobbies, that live near you or are, just like you, looking to meet and talk with others. And for many people like the trans or gay community getting to know people on their normal go outs can be kind off tricky while with a dating app they can filter people and find what they are looking for quicker.

Another good thing dating apps have to offer is if you are only looking for a one night stand you can find that. You don’t need to go around making small talk with looks of strangers because you can clear that up when you create your profile. There is nothing better that checking a profile and knowing just by that what they are looking for, especially in those apps where you can customize. From friendship through a hookup or a stable relationship you can find it all on dating apps.

There’s also those type of people who find it easier to make a conversation of topics they previously know the other person likes and that can be easily found with dating apps. If you liked someone’s picture you are probably going to give a quick check of their profile and with that you might know if you have any common interest with that person and that might lead to a way of starting a conversation. But since you can find anything and everything on this type of apps there are also those who don’t even check if they have common interests and just jump straight into getting to know the other one.

But as everything around us, dating apps are not only about flowers and love, there are cons to using them too. For example, many people think that dating apps are all about appearances and that people try to sell a perfect image of themselves while in reality they might look different. On dating apps, you can also find the type of people who use a picture from a few years ago and when you meet them, they don’t look at all like that and that, for some, can be a huge disappointment.

Some people also write too many adjectives about themselves that when you meet them personally don’t really go with what they are. For example they say they like surfing and maybe you do too so, on the date you try to bring that topic up, talking about waves, beaches you go to or surfing technics but the other person doesn’t seem to show interest or knowledge of the topic at all. That tends to become a huge bummer since you first thought you had something in common and now you discover it was a lie.

What you should take into consideration while creating your profile

If you have decided to start into the online dating world, we have a few hacks to make your profile a more attractive one. Start by choosing pictures that really fit your personality, for example if you don’t like dogs don’t use a picture where you are walking a dog just because it might look cool. When you do things like this it tends to confuse other people and makes you look a bit fake or insecure of who you really are. Ditch pictures of anime characters, digitized versions of yourself or not using a picture at all since this might only make people suspicious of who you really are, and they could think you are a fake profile.

Even though it is your personal profile try not to make it all about yourself. You might add a little information of the type of people you want to meet. Maybe even include a funny joke, a quote from your favorite book or even an idea of what your perfect date could be. In dating apps being creative is such a huge plus, especially because everything enters through the eyes.

What to do when chatting with someone

Imagine this you have make a match with someone you like and started a conversation, but how deep you want to go with that? Our main advice is don’t overshare. Be a little skeptical at least until you meet in person with the one you have been chatting. Avoid sharing your address, your work schedule, the names of your personal friends or family members since you are still talking to a complete stranger. Try also asking a few questions about them or their likes and dislikes that might lead into finding things in common or to keep the conversation moving. But remember is not an interrogation, so you can throw a question once in a bit to keep the person engaged to the conversation. Be aware of red flags such as nude pictures you didn’t ask for, sexual comments that make you uncomfortable or people that become really intense and starts to creep you out. When you feel one of these red lights turning on, try to cut the conversation and let that people know that you don’t what to talk to them anymore. It’s better to be clear than to end in something you don’t want to be part off.

Do you have any interesting stories revolving dating apps? Share them with us in the comments below!

Hi! I'm a fashion designer based on San José, Costa Rica who breaths art in all its ways; writing, reading, painting, dancing, music... and its super passionate about them all! I also adore learning something new everyday and getting to know new people. If you have any doubt, don't be shy and ask me!

8 Best Ways To Organize Your Wardrobe

Your Ultimate Guide To Choosing The Best Dating App

Your Worst Dating Habit Based On Your Zodiac Sign