Sometimes when people get together it’s just something in the stars. These couples build each other up and feed off on another’s energy. Let’s take a look how these celebrity couples shine brighter because they’re made for each other.

The pair are a Leo and Aquarius respectively. Meeting on the set of That 70’s Show, Mila Kunis and Ashton Kutcher have known each other for a while and were always easily shippable based on their set chemistry.  I always thought they were a cute couple on the show, but when they first started dating, they didn’t think it would end up this serious.

Despite acting together for eight seasons, they didn’t really know each other. Plus, they had just started dating right after Kutcher’s divorce from Demi Moore. Kunis admitted that once they got to know each other, things became serious quite quickly.

They are pretty lowkey, but their love is undeniable. In a relationship their signs like the feeling of liberation. While they have been married for years, they keep their careers separate although they’re close with each other and their children. Kunis is still modeling and doing rom-com roles, while Kutcher has taken on more serious roles as Steve Jobs and as an activist for marginalized women. They’re a pretty private couple, but you can find their moments of PDA in candid and casual photos of the two.

The Sussex Royals are a powerful Leo and Virgo pairing. The Duchess has no problem taking charge as her sign is represented by the lion. Prince Harry, as the Virgo, is a natural in the limelight but has expressed in his early 20s that he didn’t want to just live life as a royal. Leos let their points of view roar, while Virgos are more on the quiet side.

It’s interesting to know that they met through blind dating. What are the odds of finding a prince at this type of event? Besides how beautiful they are together, this fun fact makes their story even more enchanting. The American Princess and the rebel royal complement each other perfectly.

Even though their styles of communication are different, they are like minded in their philanthropy to make a positive change in society. Harry saw a positive, strong woman in his wife as she always acts in roles portraying independent women. The British media constantly blames Markle for distancing Harry from the Crown, but he had those thoughts before meeting her. Their public status and mutual support for each other enables them to succeed in their endeavors as activists.

Of the celebrity couples, J-Lo and A-Rod are the most vetted on this list although their love is fairly new. They both have had previous marriages with kids, but they feel this Leo love pairing is THE ONE. With their busy lifestyles, they really appreciate the fact they both truly understand the celebrity life. These two notorious New Yorkers couldn’t be more A-list!

As a lion’s pride, these two get the attention they crave both from each other and their celebrity status. Lopez is still hot in the music and fashion industry, especially after this year’s Super Bowl performance. The famed Yankee’s player is also staying relevant as the CEO and founder of his real estate and development firm. In their downtime, you can catch this couple taking a sexy photoshoot or time with their kids.

Whether they’re together because of Ciara’s prayer or Russell’s, the Wilsons are one of the celebrity couples making their fans believe true love is truly godsent. The singer is the Scorpio, and the Seattle Seahawks’ QB is the Sagittarius. Although these signs are typically better off as friends (based on mythology), this couple’s past and what their signs yearn for fill each other’s voids.

Even though Scorpio kills Sagittarius in myth, the happening of this couple seems to be a result of divine intervention. Ciara confessed that she prayed for her husband, and Russell said that God told him that he was put in her life to help redirect her. Her past failed celebrity exes showed in the media and her music, but now she has a new, positive muse which inspired her loving album Beauty Marks.

What it feels like to be “Cancelled”: Influencer Speaks Out

Her sign desires security and consistency, while his thrives in spontaneity. After Future and her past celebrity exes, Ciara just wants a good family man who will always be there. Russel more than fills this role and even treats her son as his own. Adding the spontaneous These signs have a love for deep conversation and enjoy sharing their philosophies. The Wilsons are often seen participating in charity work with children and tag team philanthropy together.

Kimye is one of the controversial and misunderstood celebrity couples. Mrs. West is the sexy Scorpio, to no surprise, and Mr. West is the dynamic Gemini. These signs could be more dissimilar. Scorpio is a super fixed sign, while Gemini is often in a state of transition and redirection. Another way these signs are opposites is that the scorpion prefers to be hidden and secretive, but the twin mentality is to be outgoing and highly social.

Uniquely, they are the perfect example of how opposites attract. Kim cares highly about her image and is always posing, but her hubby helps her to relax and be more casual (as pictured above from his IG). Kanye also benefits in that she keeps him focused. One both their signs desire to be understood.

They both have been misunderstood by the media and public eye, and I always saw this as what brought them together. Kim and her infamous tape and Kanye and his notorious public breakdowns were times that people keep defining them by, but they know all too well that one bad angle doesn’t mean their bad people. These loners have a strong love for each other, their family, and fashion, and their few similarities keep them together.

Who are some other celebrity couples that seem like a match in the stars? Let us know in the comments! 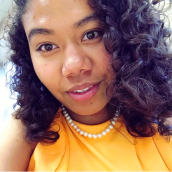 Ex-wannabe teacher turned copywriter and social media guru = Tarrah Sargeant. I have a BA in English, and I am currently wrapping up my MA in Communications with a concentration in marketing communication. As an avid people watcher, I like to give my perspective through logic, analogies, and unusual situations. So if you like humor, video games, food, creativity, and normalized weirdness, you have found the right one! For more extroverted introvertedness, follow me @throneofwheels .

8 Celebrities Who Are Rocking The Dad Bod Look

Celebrity Products That Pretty Much Suck

7 of the Wackiest Celebrity Conspiracy Theories

Emmy Awards Looks We Can’t Get Enough OF