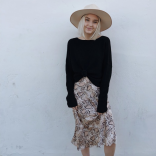 8 Eye-Popping Summer Nail Styles As Bright As The Sun

Country music is definitely an acquired taste, but it will always have a very special place in my heart.

Here’s a list of who I consider to be the best artists of all time. Maybe after listening to their top songs, you will learn to love country music as much as I do!

This list could not possibly start of with anyone other than THE George Strait. He is such a legend in the ic scene, and is considered by many to be the “King of Country.” His first album was released in 1981, and he has been killing the country music scene ever since.

Tim McGraw’s music can be best described as being “feel good” country music, and I love it so much. He released his first album about 26 years ago, and some of his most popular hits include, “I like it, I love it” and “Humble and Kind.” These two songs are far from being his only amazing songs, so give his music and listen and decide on your own favorites!

Reba McEntire is one of my absolute FAVORITE country music artists, and I do not entirely know why. Something about her music is so fun that I simply cannot help but sing along. If there is one song by Reba that you HAVE to listen to, it’s “I’ll Have What She’s Having,” whether you consider yourself to be a country music fan or not, I’m sure this song won’t do anything but make you want to get up and dance.

Keith Urban is MY all-time favorite country music star for sure. After having the opportunity to watch him perform live a few years ago, he certainly won over my heart. He’s definitely most known for his song, “Kiss a Girl,” from his 2009, “Defying Gravity” album. Listen to this New Zealand country star and you’ll be a die hard fan before even listening to a full album all the way through!

Carrie Underwood is simply THE country music QUEEN, and there is not much more to be said about it. From her amazing music to her incredibly fab sense of fashion, Carrie Underwood has so much to offer to the country music scene. From her classic hit, “Jesus Take the Wheel” to one of her newest releases, “Cry Pretty,” she has stayed true to her country roots while creating such catchy and popular songs! Carrie Underwood simply never disappoints, and you’ll learn why after listening to a few of her top hits.

This list certainly would not be complete without the inclusion of Johnny Cash. He reigns as one of the top selling music artists of ALL-TIME, and he most certainly proved himself in the country music industry during his lifetime. He was able to combine rock n’ roll and country in a fresh way that blessed the world with iconic music! Bottomline, there is a reason that Johnny Cash is a household name when talking country music.

Blake Shelton might most recently be known for his role as a judge on the hit show, “The Voice,” but he has definitely done his part in proving himself in the country music scene. Some of his most popular songs include, “God Gave Me You” and “Sangria,” but that is far from all-inclusive of all of his greatest hits. If you are looking for a great country artist who has music that will always entertain you, give Blake Shelton’s music a try!

Kacey Musgraves is certainly the newest country music artist on this list, but definitely has proven herself with her immense talent. She released her first album, “Movin’ On,” in 2013 and has not stopped in growing more and more popular since then. With flawless vocals and an amazing performance ability, Musgraves has done nothing but contribute AMAZING music to the country music industry.

This list is far from inclusive of all of the amazing country music stars, but definitely contains some of the top artists. Are you fans of any of these artists? Comment down below your favorite songs by them!

10 Dorm Party Essentials You Need To Have For Your Room

8 Eye-Popping Summer Nail Styles As Bright As The Sun