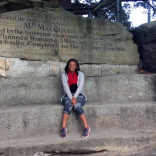 Why Following Your Dreams Should Never Take The Backseat

Dance Academy focuses on a high schooler, Tara Webster, who lives on a farm and dreams of becoming a professional dancer. After being accepted to a prestigious ballet school in Sydney, Tara finds that she has a lot of catching up to do in comparison to her classmates.

What makes this international television series stand out is its way of illustrating a strong coming of age story. Not only are viewers introduced to Tara but they also get to know characters such as Abigail, Christian, Kat, and Sammy. Each character adds to the story with in-depth storylines from eating disorders to dealing with loss.

Skins is by a far one of those international television series that make viewers really think about themselves. The show itself focuses on a group of teenagers who live in Bristol and follows them in their daily life. The show tackles controversial issues such as mental illnesses, death, drugs, homophobia and dysfunctional families.

Skins UK doesn’t shy away from testing the boundaries of television censorship. However, America had tried to copy Skins in the past and had failed based on the nature of the show. Due to America’s censorship, a lot of scenarios featured in Skins UK could not cross over into America’s version of Skins. This problem led to only one season being aired on MTV in America. Skins UK the original show remains to be the best version and is free on YouTube for anyone who loves drama, realness, and deep plot lines.

Personally, my favorite characters remain to be in series one and two. Those characters are Tony, Michelle, Jal, Chris, Maxie, Anwar, Cassie, Sid and Effy.

H2o is the tale of three typical teenager girls Emma, Rikki, and Cleo who are turned into mermaids after entering a moon pool upon a peculiar island by the name Mako Island. The girls are forced to come to terms with their new life and power as mermaids which places them in some awkward situations at times. This cute series does have a spinoff but in most cases, the original show is always better.

One thing about this international television series is the fact you almost feel like you’re in Australia when you start to watch this series. The beautiful ocean and marine life are continuously presented in the series. The character’s accents are extraordinary. Let’s not forget how hooking Cleo and Lewis’ relationship is.

Out of all the international television series listed Life With Derek is probably the most similar to American lifestyle (obviously because America and Canada are connected). Life With Derek is a wholesome family show about a high school teen, Casey McDonald, who becomes the stepsister of a popular high schooler named Derek. Casey and Derek go head to head through a majority of the episodes which makes this stepbrother/stepsister relationship so funny and relatable to watch. Most of the characters on this show can be spotted in other Canadian shows that will be mentioned later on. If you happen to read comments on YouTube than you’ll know a lot of viewers claim to see sexual tension between Casey and Derek.

My Mad Fat Diary documents the life of Rae Earl, a teen girl who struggles with body image and mental illness. After trying to kill herself, Rae is sent to a psychiatric hospital and is released after four months. Rae reconnects with her old friend Chloe and tries to befriend Chloe’s group of friends.

This series is raw with emotion and created with heart. Rarely, does television series for teens present a heavyset character as their lead role. Plus, Rae is met with a relationship from one of Chloe’s friends Finn who falls for Rae. Here is a series where the unlikely girl gets the cute and smart boy she deserves. But even with love from her friends and boyfriend, Rae still struggles with her body image.

6. Degrassi: The Next Generation – Canada

Degrassi: The Next Generation is the spinoff series to the original Degrassi Jr. High and Degrassi High series that premiered in the 80s. Similar to Skins, Degrassi focuses on the life of Canadian teenagers who attend Degrassi Community School. This show features issues such as child abuse, rape, mental illness, drug addiction, school shootings, and abortions.

This show did touch American television and remains to be well known in the United States. What is loved about this international television series is the fact viewers grow up with these characters. You see them from junior high to in some cases college. Not only are viewers given the chance to be introduced to characters such as Emma Nelson, Jimmy Brooks (played by Aubrey Graham “Drake”) and Paige Michalchuk. Viewers who are familiar with the original series are reintroduced to characters from the past like Spike, Snake, and Joey. In addition, this series is long so you have plenty of hours to enjoy.

After crashing landing in Australia to discover the hype of surfing, aliens disguised as teen girls bunk with a local Australian girl named Amber who teaches the aliens about surfing, school, and humans as they try to fix their ship so they can go home. For the most part, this international television series is cute and very girly with love and relationships often becoming the conflict. Yet, this series also intertwines a lot of surfing between the drama and their accents definitely help make this series easy to watch.

Underrated for the most part, this international television series is usually compared to the UK series The Inbetweeners. Some Girls television series features a group of girls that deal with the daily struggles of life while lead character Viva uses her love for psychology to help sort out some of the problems. Kudos to the show’s creators for casting a group of girls who are diverse. In addition, placing Viva in an interracial relationship with Rocky. If this series isn’t your favorite that’s okay. But this international television series carries a great coming of age story and shows the power of friendship among young girls.

Regardless, if you have Netflix or cable you should be able to check out these awesome international television series from the UK, Australia, and Canada on YouTube or other alternative sites like the Daily Motion. Let us know in the comment section which shows you liked.

10 Pieces Of Clothing You Should Purge This Year

Why Following Your Dreams Should Never Take The Backseat